Heaney moved his family from Belfast in Northern Ireland to Glanmore in Co. Wicklow (Irish Republic) in 1972. Initially a tenant he eventually purchased the property in 1988. The cottage became the family home and later an iconic refuge for composing poems.

Heaney takes an active role in his eclogue (POET) exploring and commenting on issues that emanate from his dialogue with MYLES (whose name recalls the Latin miles (soldier/ warrior) suggestive of an active hiberno-centric spokesman, possibly Myles na gCopaleen, one of the pen-names of Brian O’Nolan or Flann O’Brien).

Initially the eclogue exposes Heaney’s conscience at living in the Irish Republic as an in-comer from the North; it ends with a delightful Gaelic-derived song of summer celebrating the beauty of the Irish landscape. Heaney respects the key melancholic elements of Virgil’s Eclogues – loss, guilt and the importance of recording ‘songs’ in written form for posterity. The final hymn to summer insists on the sweet effect that music and poetry have on existence.

MYLES addresses Heaney, confirming the success of that original move (you’ve landed on your feet). He identifies its three principal benefits – rural ownership (house and ground), an iconic resource (your own bay tree … both a culinary and triumphal emblem!) and work-space (time to yourself) … in sum the ideal surrounding if Heaney’s free-lance poetic aspirations are to get anywhere (If you can’t write now, when will you ever write?)

POET salutes Ann Saddlemyer as the catalyst of change, (a woman … call her Augusta because we arrived in August), and the annual blessings the month of August bestows (baled hay and blackberries and combines  …  Augusta’s bounty).

MYLES, despite his nationalist irritation (outsiders own the country nowadays), has accepted Heaney’s presence (I don’t begrudge you) as legitimate (Augusta’s tenant); though Canadian she has every right, maybe more right than most, to her quarter acre).

Saddlemyer’s intimate local knowledge (she knows the big glen inside out) opens the link to the eclogue’s third party, Meliboeus, based, commentators suggested, on real-life poet, playwright and collector of Irish folklore John Millington Synge (1871-1909). Synge’s wandering lifestyle brought him close contact with rural Irish folk, some of them vagrants (tramps … tramping the roads), others servants to the rich overheard chewing the fat (servant girls colloguing in the kitchen) and expressing a common feeling (changed lives!).

MYLES’ ‘beef’ derives from the realm of historical redistribution of property and economic balances as they affected the Irish population: supposedly improved conditions (Land Commissions making tenants owners … Empire taking note) brought no benefit to Synge’s generation (Meliboeus’ people went to the wall) – what is current,  be it the ‘Celtic Tiger’ phenomenon fuelled by foreign investment (now with all this money coming in) or the pre Good Friday Agreement promise of political stability (peace being talked up) will only hit a different section (the boot’s on the other foot) – downturn is hurting (small farmers here are priced out of the market).

Plus ça change plus c’est la même chose! POET confirms that nothing has changed for the rural Irish (backs to the wall and empty pockets).

Heaney admires the Meliboeus/ Synge character for adopting the itinerant life (never happier than when he was on the road), living shoulder to shoulder with the deprived (people on their uppers) and content in his own company (loneliness … his passport through the world).

His lyrical responses to things around him (midge-angels on the face of water, the first drop before thunder) whatever the weather (stranger on a wild night, out in the rain falling) have left an indelible mark (his spirit lives for me in things like that).

MYLES salutes education (book-learning is the thing) that enabled POET (a lucky man) to rise above the norm. It is he, Myles, who is left with the daily stresses of the standard Irish alternative:  farming – its daily drudgery (stock to feed … milking times … tillage), the bodily wear and tear (blisters on your hand), things beyond his control (weather-worries).

POET chuckles at the nickname Synge might have used to describe him (‘Mr Honey’), a ‘foreigner’ suddenly turning up in a rural community with everything going for him, a Heaney’/ ‘Honey’ man who walked away from his farming background and embraced first academia then poetry.

Unlike the cautious bards of Eclogue IX POET accepts MYLES’ invitation to sing a song that Synge would have appreciated (our old language that Meliboeus learnt) an elemental hymn addressed to both surroundings and listener (for the glen and you).

The harbinger of Summer is on the wing (cuckoo cuckoos, Welcome, summer is what he sings) … ground-hogging flora is alive (heather breathes) pressing its head against soft bog-pillows … plants pay reverence to elemental forces (bog-cotton bows to moorland wind) … local fauna jubilates at summerness (deer’s heart skips a beat; he startles).

Vitality is the byword (cuckoo keeps on calling … speckled fish jumps, the opportunist early bird will catch the worm (strong warrior ( ) up and running). 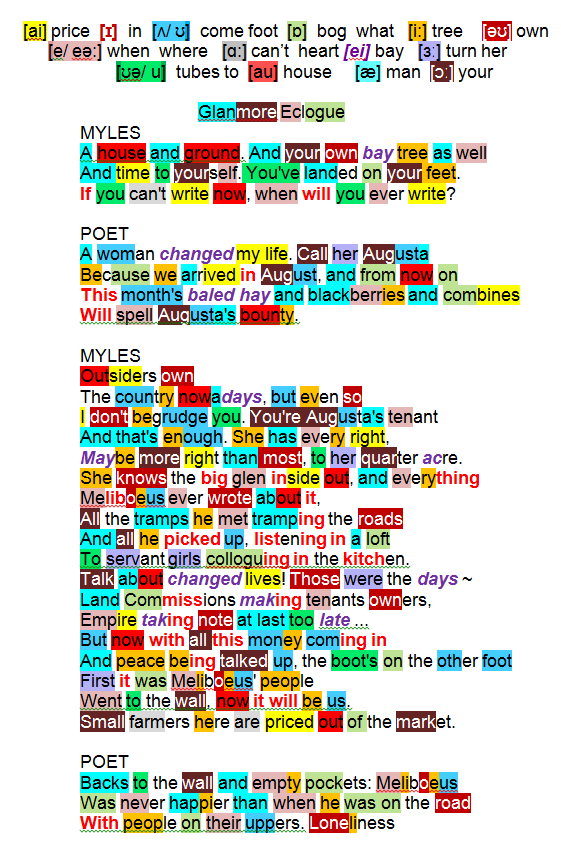 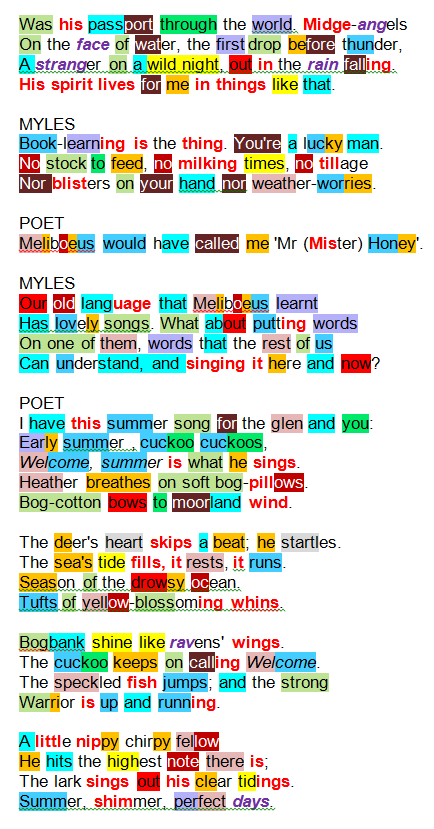