In his interview with Daljit Nagra in the March 2001 edition of ‘Fine Lines’ Heaney commented: The title comes from ‘an actual pinpointed moment’… aunts and mother out,  child left with his grandmother, for the first time away from home and becoming scared, bewildered “what ails you child?” … made more homeless by this language … the phrase ‘dwelt in memory’ over nearly 60 years ‘a little aperture a little chink into English English, into the other English … the high art English I learnt when I went to Shakespeare and to Chaucer’.

Heaney’s earliest memories of his grandma McCann are pre-electricity – of the old candle-lit order (grease congealed), with its smutty residues (dark-streaked … wick­soot).  His abiding memory is of the time-worn, damaged hand that carried the flame within its narrow radius of light (smashed thumb-nail … ancient mangled thumb) with its smooth, hard opalescent colouring (puckered pearl), the rock-hard (rucked quartz) nail of an disorganised classical prophetess (littered Cumae).

The snapshot of his Grannie is tied to a moment of miraculous innovation (first house where I saw electric light): she a remembered presence in her dotage (sat … year in year out… same chair), wearing her same old emblematic footwear (felt slippers), fur-lined against the cold, unfastened for comfort (unzipped).

Her voice was never loud (nothing else but whisper) even at a moment of emotional crisis for her displaced grandchild (night I was left to stay) that left them both in despair.

He, insecure and in tears (wept and wept), hiding his face (under the clothes), inconsolable despite efforts to soothe (waste of light left turned on). She, in breathless search for a reason (‘What ails you, child), increasingly ineffective (urgent, sibilant).

Ails still resonates across the years (far off and old) as an echoing dark, watery nightmare (scaresome cavern water lapping a boatslip), her impotence of no comfort to either of them (helplessness no help).

Grannie McCann lived in a modest terraced bungalow in New Row, Castledawson; the house is still there.

Grannie McCann’s voice was a tide of sibilants (lisp and relapse) that Heaney associated with the age-old prophetess of Greek mythology (eddy of sybilline English) echoing the watery impact of sea-slap on landing-stage  (splashes between a ship and dock) that the simple soul child-Heaney was (animula) would, all in good time, come to recognise.

Much later he linked the arm-whirling frenzies of the Sybil figure with the ferry (churned) that carried him down Belfast Lough to England and a summer job. Thence by rail  to London (transport of a morning train) watching the outside world speed by (brow-to-glass) and beginning to react like a young man on his journey into verse (‘there-you-are-and-where-are-you?’ of poetry itself).

English neighbourhoods (backs of houses) similar to his Gran’s; ‘period’ domestic appliances (meat-safes and mangles) visible from the speeding window (railway-facing yards of fleeting England); recognizable vegetable patches (allotment  scarecrow among patted rigs); recreational amenities (town-edge soccer pitch); a middle ground that dfrell away as it receded (groin of distance); arable farming (fields of grain) … a growing sense of Shakespeare’s Henry VIII (Field of the Cloth of Gold) and a Chaucerian destination (Southwark) the start of Heaney’s pilgrimage with the new smells (Moyola-breath by Thames’s) of a foreign shore (‘straunge stronde’).

The miraculous appearance of domestic electric light at the touch of a switch captured the attention of child-Heaney who was curious about everything and found ways to satisfy his interest (the bow-backed chair… I could reach).

Clambering up was permitted under supervision (let me … watched me) and he took no time to copy the tiny action that produced something phenomenal (the little pip would work the magic).

Unprecedented access to the grid had resulted in a radio receiver with wider options:  a different style of control (turn of their wireless knob), a glow with marked frequency destinations (dial). Experimenting with it was permitted under supervision (let me … watched me) and his dexterity (at will) gave him unbelievable global reach (roamed … the stations of the world).

The grown-ups listened for the iconic herald of radio reports (Big Ben and the news), rationing their listening (gone … over …switched off), hiding all lights from enemy WWII aircraft (all quiet behind the blackout). The silence was punctuated by the sounds of Irish 1940s’ Heaney/ McCann normality – knitting needles ticking in the room and outdoor sounds audible via the chimney (wind in the flue).

At the interface of old and new the image of an old sedentary Grannie (her fur-lined felt slippers unzipped), now spotlit by progress (electric light … over us).

The finger end that caused Heaney’s child-self such alarm (dirt-tracked flint and fissure of her nail) will, by its very keratin properties (plectrum-hard) and shiny colouration (glit-glittery) have endured in her grave (Derry ground) alongside other relicts of the woman she was – her devotion (beads) and her bones (vertebrae). 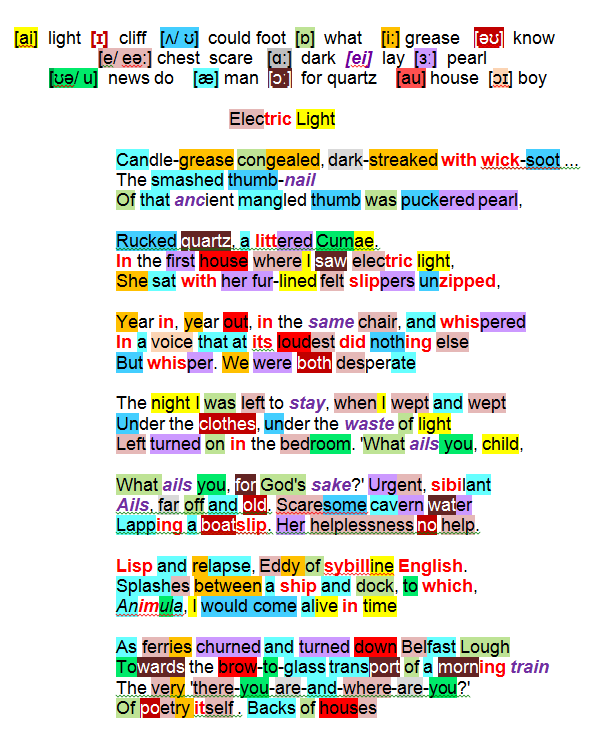 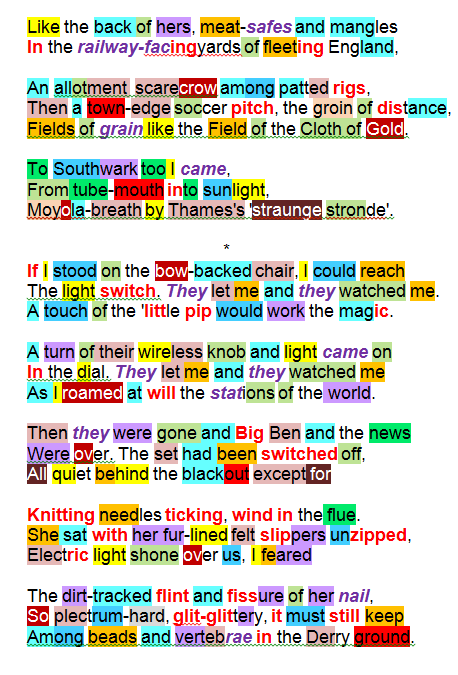