A sequence of 5 sonnets, set at a time when Heaney was five or six years of age, is addressed to the memory of Mick Joyce. Heaney resurrects a figure from the past, recalling him with great warmth, affection and good-humour. The man was ‘demobbed’ at the end of WW2 and, it is suggested, became part of the post-war reconstruction programme.

Personal pronouns are those of a shared relationship: you, your, we, I, me.

In a sequence that will regularly allude to life-and-death issues, the final couplet of all clarifies Heaney’s subtle choice of title: Mick Joyce now in memoriam is depicted at a moment when, on leave from his duties and very much alive, he was ‘in heaven’ in an altogether different sense.

Transition from ‘soldier’ (the use of inverted commas is revealed in the narrative) to craftsman: Kit-bag to tool-bag/ Warshirt to workshirt; a man unused to his particular relocation, out of your element, related now to rural farmer-in-laws (an evident rhymed play on ‘father-in-law’).

Coping with country tasks in a conspicuously clumsy way (The talk of the country) Mick was, however, a builder in a class of his own and happy in his own company: out on your own/ When skylined on scaffolds.

Heaney borrows the identity of a Trojan War super-hero to tease the memory of an ex-‘soldier’ who never actually fought: A demobbed Achilles/ Who was never a killer, a mere ex-stretcher-bearer Turning your hand/ To the bricklaying trade on civvie-street (the contemporary reference to civilian life).

Heaney pursues his good-natured references to classical history: as Achilles was a warrior-prince so Mick has an almost burlesque ‘royal’ presence on the building-site: prince of the sandpiles.

Achilles was a great military leader; in contrast, Mick resembles classical Greek military ‘heavy’ hod-hoplite commander more adept at building construction: Keeping an eye/ On the eye of the level.

He is back home from the war, a humble Medical orderly,/ Bedpanner, bandager  now dealing with post-war issues at home transferred to the home front. The spit-and-polish of army life and its uniform might have been replaced by a different, less demanding routine but Forces’ habits are not easily forgotten:  Rising and shining/ In brass-button drab.

Heaney recalls listening (You spoke) and from distance compares the heroic, boy’s comic stories he heard (served in the desert/ Been strafed and been saved) with Mick’s non- combatant reality: the medical orderly who enjoyed a softer option, saved from being shot, perhaps but by courses of blankets/ Fresh folded and piled in the open air (like bales on a field) and not in a trench : no sandbags that time.

In hindsight Heaney suggests that Mick’s deliberate distance from the front-line  might have helped him to survive: a softness preserved you.

Despite their considerable age difference, Mick’s relationship with the youngster was pitched man to man  and based on some kind of unwonted familiarity (You/ Took me for granted) that allowed a man of military age to talk about  sex with a three or four year old  as a pretext for mocking the ‘outrageous’ even un-Christian sexual habits of the English: who you said/ Would do it on Sundays/ Upstairs in the daytime.

Man or superman? The young boy reveals he was awed by Mick’s strength (the weight of the trowel/ … surprised me and by his dexterity –  a bricklayer able to sever a brick in a flash and then do tricks (twirl the trowel Fondly and lightly).

Acting as Mick’s right-hand man,  sent to wash the trowel during a break, it took all his strength to meet the challenge (needed two hands) of handling the thick-spanned/ daunting implement.

We are suddenly next to Heaney as his poem takes shape: he has found a title for the sequence and explains his choice.

The distance his memories have had to travel leaves some of them hazy: his friendship, the day when Mick was first seen at the Heaney home on his first leave, is partly blurred: started if not quite from nowhere, then somewhere far off.

However he recalls the first meeting in great detail – the time, the place, those involved, the ambient conditions, the particular circumstances: a bedroom, bright morning …  Mick not alone (woman) …  his first leave … a first sighting  a stranger arrived …  a house with no upstairs.

Title explained: the relief and respite that war-leave brought to soldiers apply specifically to Mick Joyce, now dead (euphemistically ‘in heaven’) as he and they enjoy a moment of pleasure heaven enough/ To be going on with. 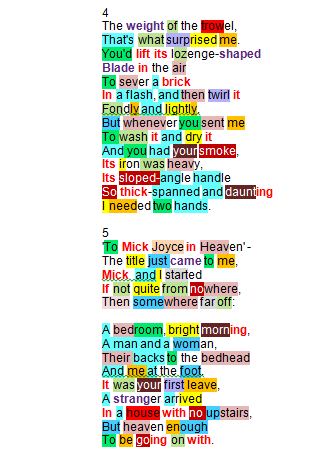