In a newspaper interview Heaney revealed how, as a boy, he watched American troops marching by from ‘up a beech tree’. The momentous preparations for D-Day  brought an international force to Britain which was to launch an assault on the Normandy beaches and free Europe from nazi oppression.

Unusually Heaney, who would have been a small boy at the time, uses a speaker working in the local abattoir and the poem is in quotation marks.

Subsequent  loss of life on Normandy beaches endorses the ironic juxtaposition of butchered pigs and soldiers –  at the very moment when American troops arrived we were killing pigs/ sunlight and gutter-blood/ outside the slaughterhouse, the animals squealing as they were bled,

The voice speaks as a witness (note the poem’s speech marks), one of those engaged in the slaughtering process, in our gloves and aprons, coming face to face with the American troops.

They become an object of curiosity:  recognizable military worn by newcomers with Sunburnt hands and arms. Unknown/ unnamed gathering as an armed force, Hosting  (from the original Latin for ‘army’).

Secrecy was a key to success – the general public, here the inhabitants of a modest Irish community, could only have guessed at the significance of the American presence standing there like youngsters.

The newly-arrived seem to confirm anecdotes from WW2 that suggested, sometimes enviously, that American soldiers were well supplied with luxuries the locals were deprived of and trained to empathise with the local population: they tossed us gum and tubes of coloured sweets. 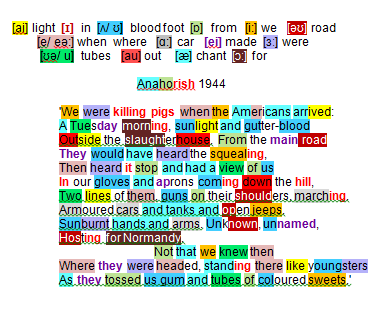