Heaney  recounts  the story of a wartime visit to his local airfield. The visit becomes a parable to do with insecurity, temptation and resistance.

The airfield is long since out of commission, first disused then re-developed : first … back to grass, then after that to warehouses and brickfields. Its iconic centre-piece (wartime grey control-tower) has retained its control status: rebuilt and glazed into a hard-edged CEO-style villa.  Post-war changes in attitude and style introduced a new lexis; here the ‘hard edge’ of uncompromising money-making opportunities.

Toome aerodrome is a part of history; the poet transports his memory and his senses back to the smell of daisies and hot tar on a newly-surfaced cart-road and to a specific moment: Easter Monday 1944.

There were compelling reasons for a lad of his age to be elsewhere, the annual bright booths of the fair at Toome made all the more attractive by his longing to be there (all the brighter for having been denied). As he lists the attractions he all but stamps his heels: wherever the world was, we were somewhere else. But she is in charge, she has decided and he does not anticipate the situation changing: had been and would be.

The youngster becomes conscious of the pretext for her being where she has dragged him.

The expectancy in the air was greater than any odds that sparrows might fall or B-26 Marauders not return. The airy structure above land usurped by a compulsory order was part of the unfolding drama: watched and waited.

An insecurity transmitted itself to the youngster (a fear crossed over then) linked with planes and pilots like the fly-by-night/ And sun-repellent wing that flies by day – an anxiety that he might be about to lose her – a tangible suspense as both heavens and humans watched and waited: sky above /me and her that day.

Legend (and post-war film drama) had it that American forces in Britain in the 1940’s provided an irresistible appeal for many young British women. Hence the question in the young boy’s mind: would she rise and go/ With the pilot calling from his Thunderbolt. The pilot assumes godlike status in a dual reference to the name of an American airplane and the ultimate weapon with which the Jupiter imposed his will.

Faced with temptation the girl’s growing resolution is just discernible to the young witness … only the slightest/ Back stiffening and standing of her ground. Her recognition of some greater responsibility than infatuation with a god-like stranger emerges as her hand reached down and tightened around mine.

The final lines seek to abstract some truth from the incident that may have a universal significance, both in space and time: Here and there and now and then.

Heaney’s thesis: If self is a specific place, then so is love, not something ‘fly-by-night’ or shallow but  rather the outcome of bearings taken, markings, cardinal  points. Navigational references deliberately target the aviator and the temptation he represents.

The options open to the girl at Toome resulted in obstinacies, dug-heels and distance – values and upbringing conspired to defeat infatuation and marked her definitive stance! 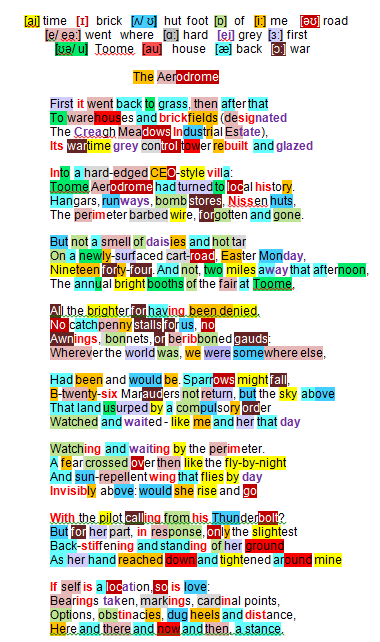