The first of three poems alluding to the threats posed by climate-change – the piece recalls a moment from Heaney’s visit to Mennonite country in Iowa.

His powers of observation, memory and recall resurrect a scene and a moment in compelling detail. His store of local and biblical references adds a decidedly Mennonite dimension and contributes to his growing conviction that the world is under threat.

Stranded in a snowstorm beyond any sign of human presence in Iowa once, among the Mennonites and freed from the ordeal of driving (conveyed all afternoon) Heaney could concentrate on what was rubbing off on him: the sheer volume of snow (slathering – an ingenious sonic porte-manteau, perhaps conveying both the liquidity of ‘slaver’ or even saliva and the delicate nuances of lather. Such light as there was emanated from the sleet-glit pelting beyond the vehicle’s window.

Visual imagery gives way to sound you can hear in your head, the onomatopoeic slumps and flits of windscreen wiper fighting to clear the downfall. They have an absolving quality, cleansing the windscreen of snow as absolution cleanses a person of guilt. This religious input prepares for the volta after line 9.

Heaney’s ‘eye-camera’ zooms through window glass out into the lying snow, from wider (a field in which the last evidence of harvest stubble protrudes – corn stalks flagged the snow) – to narrower –a decidedly old model mowing machine disguised now by the snowfall.

An intransitive verb of plenty is used transitively: snow brimmed its iron seat.  The mower’s  spoked wheels are transformed into a kindly human face with thick white brow.

Black-and-white produces paradox: the reflective snow takes the shine off oil lubricating the equally personified black-toothed gears. The oil has not washed away and within the wider context of the poet’s fears for the earth’s future the image sounds a warning.

The volta occurs at line 10 and the message turns unmistakeably Biblical adopting its archaic usages as Heaney finds his way back to civilisation: verily I came forth as one unbaptized.

The link word wilderness, commonly used in the USA to describe vast tracts of remote land such as he has just experienced, transports Heaney to the biblical Middle East.

He emerges from the ordeal as one unbaptized, as one without an entrance ticket to heaven, as one experiencing similar conditions to the crucified Christ – a land deprived of daylight at three in the afternoon (darkness at the third hour) a Temple curtain (veil) rent in two (in tatters) by a wrathful God figure.

What he experienced in Iowa once exposed to the slush and rush and hiss of the elements made him feel less like Moses leader of the Israelites fleeing to the Promised Land through the miraculously parted waters of the Red Sea and more the herald of rising waters, the unavoidable sea-level threat facing mankind as a warming atmosphere melts polar ice. 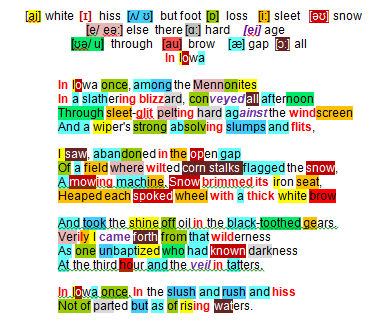