The omens and warnings of Anything Can Happen and In Iowa ensure that the mere mention of natural phenomena in decline awakens fear of global threat. The first-person speaker recounts a personal experience flying above the massive glacier behind the town of Hōfn in south-east Iceland.

Heaney toured Iceland in 2004 with piper  Liam O’Flynn on a joint poetry/ music venture; en route to their next destination Heaney overflew ‘ this stony grey scar of ice …we learned that the ice is actually melting. As a ‘child of earth’ I’ve rarely felt more exposed’ (DOD p.411)

Heaney writes his headline: an ice mass of huge magnitude is thawing: The three-tongued glacier has begun to melt.

Seen from a plane the moving (undead) glacier appears as he might have expected: irregular projecting surfaces laid on rock ridged and rock-set, flour coloured (grey-gristed), with animal skin textures (earth-pelt) its nap resulting from the age-old inter-grinding of ice and rock (aeon scruff).

He felt the glacier’s hostility (feared its coldness), its low temperatures sufficient to ice up and prevent him looking out (iceblock) through plane window dimmed with breath and, as a consequence of its deepfreeze  grip,  thwart the exploitation of rich deposits (the seep of adamantine tilth)

… and put a block on the speaker’s mental ability to compose and transmit his feelings: every warm, mouthwatering word of mouth.

When  first and last lines are juxtaposed an ironic contrast is generated between Nature’s three-tongued glacier and the single-tongued human mouth – Man, acknowledged by most to be the major threat to the environment, is inhibited from reporting it. 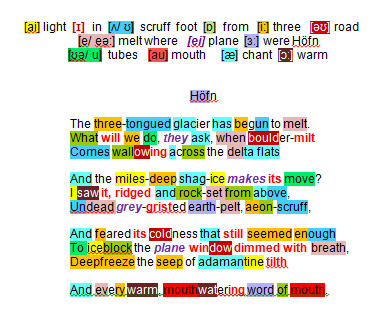