A sequence in memory of Czeslaw Milosz using an adjectival title that offers a variety of suggestion: no longer alive; not of this world, somewhere else; extraordinary.  Each poem in the sequence talks of issues and experiences that in one sense or another are beyond the material world.

The dedication confirms Heaney’s admiration of Milosz, an Eastern European poet (1911-2004), Polish speaking, of Lithuanian origin, who lived through successive periods of political turbulence from the Russian Revolution onwards and via Communism, Nazism, The Cold War and Iron Curtain to Polish Independence from the Russian Federation. He was Nobel Prize-Winner for Literature in 1980, twenty years after moving to the USA where he was at once diplomat, scholar, translator and professor at Berkeley University. His poetry, mainly  in Polish, was banned in Poland until after 1980.

Many factors from Milosz’s life chimed with Heaney’s experiences in Ulster. In an interview Heaney referred to him as ‘my hero’ and nominated him as ‘The Giant at my Shoulder’ in an Irish radio series in 1999.

The poem confirms that the religious conditioning of Heaney’s childhood has never really died. Heaney confesses to his lapse but acknowledges that key words never cease to resonate deep within him.

Catholic observance, as one of millions, was a submissive, unquestioned practice. Like everybody else, I bowed my head to participate in the symbolic consecration of the bread and wine, looking heavenwards to the raised host and raised chalice transformed into the body and blood of Christ (yet still wine and bread). He did not question transubstantiation, accepted that a change occurred. His parenthesis hints however that even at that young age the seeds of doubt were already planted (whatever it means).

He attended the Eucharist as a matter of course (received the mystery on my tongue) and went dutifully and piously through the act of thanksgiving confident that previous sins had been written off.

That has changed! There was never a battle between Heaney’s reason and his faith nor at confession (a scene when I had it out with myself or with another). Fundamental, yes, but out of public view (the loss occurred off-stage).

What happened did not clear the decks completely – Heaney confesses to indelible marks, things I cannot disavow. Words and symbols, ‘thanksgiving’ or ‘host’ or ‘communion bread’ that still reverberate (undying),  excite sudden, strong feeling (tremor) and apply a force (draw like well water far down).

In a poem addressed to the Polish language, his ‘faithful mother tongue’ Milosz wrote … without you, who am I?/ Only a scholar in a distant country/, a success, without fears and humiliations./ Yes, who am I without you?/ Just a philosopher, like everyone else.

When Heaney was 17, he and a cousin were sent on a pilgrimage by a Catholic aunt … two intelligent teenagers at large and left to their own devices. Heaney chuckles at the person he was, revealing that he did what he had to and adding the irreverence and retrospective naivety the experience threw up.

A journey by train, from Ulster to the shrine of St Bernadette in Lourdes – You’re off, a pilgrim, in the age of steam.  Two ferries later, an overnight in Paris.

The heady competition between religious training religion, adventure and freedom brings out a humorous but sacrilegious aside (picked up perhaps from the Evelyne section of Joyce’s Dubliners (1914) in which a young woman, tempted to leave family behind and elope is superseded by the Catholic values of sacrifice championed by a 17th century French nun) on behalf of the Blessed M. M. Alacoque,/ that she be canonised. The aunt would have been delighted by her nephew’s apparent resistance to earthly temptations but not so much, perhaps, at any irreverent allusion to boiled eggs (in French oeuf à la coque).

Then onwards to Lourdes.

An Advance-Level student of French could put his learning to active test for the first time …  also, who knows,  reveal a pledge of sobriety engineered by his Catholic aunt Sarah: pas de vin, merci … du thé.

The acid test of knowledge – the waiter who took you at your word would return with a pot of tea!

Memories of where he stayed have faded (Hôtel de quoi in Rue de quoi?) but not his job as a ‘brancardier’ or what identified his role (distinctive coloured bandolier).

He recalls the conveyor belt of sick on stretchers in precincts of the shrine, how lacking in warmth the surroundings were (bleak concrete) as they queued for their immersion in chilly but consecrated spa-water (their bath).

He remembers the recurrent background noise  (the word ‘cure’ hangs on the air), the associated paraphernalia (crutches hung up near the grotto altar) and appeals for divine intervention (always prayers out loud or under breath).  One senses that even in his late ‘teens Heaney’s rational mind judged the concept of miraculous recovery more a matter of faith than a reality.

Those present fell into international groupings: Belgian miners with tools of the trade: brass lamps; Catholic brotherhoods on parade: sodalities with sashes, poles and pennants; the use of metonymy to identify the Spanish: mantillas.

All of them, rosary-bearing people in the bosom of the Church … the vocal confirmation of their Catholic belief (unam sanctam catholicam acoustic) echoing through that underground basilica.

Heaney ponders the gap between a more solemn tradition (not gone) and the branded commodity it was turning into (not what was meant to be), between the basilica’s physical appearance and its spiritual significance: (the concrete reinforcement of the Mystical Body).

He can think of a similar focal point from ancient Greece (Eleusis of its age) a magnet for the followers of pagan goddesses Demeter and Persephone, antique equivalents, perhaps, of St Bernadette.

He chuckles at the market-driven mementoes of his visit: a container of Lourdes water on a shoulder-strap – tongue-in-cheek très chic – a mass-produced globe for someone’s mantelpiece with snowflakes falling like white angel feathers around the main iconic figurines.

Finally the proof of attendance and duty – for his CV for stretcher-bearing work, a certificate.

The poem features specific examples of painting and music, neither of which is quite of this world. Its epilogue turns to Milosz to whom the sequence is dedicated, reiterating his particular view that writing is superior to any other form  of communication.

The voluntary renunciation of material values in preference to spiritual existence echoed in the Church-service cue and response (do you renounce the world? I do) opens the way to Heaney’s artist friend Barrie Cooke painting abstracts with religious connotations (godbeams). Heaney takes on the challenge of transposing Cooke’s visual images into words.

He observes beam-like vents of brightness deemed to represent the light of heaven with their appearance of fluted silk (a luxurious, natural product) or rayon (commonplace and man-made) as seen in an old-style draper’s window.

Cooke’s canvas presents an interplay of angled light (airslides), overlays that distort transparency (scrims) or layers that mute colours (scumble) leaving Heaney with a vague impression of something solid, even monumental (columnar sift).

The palette upon which Cooke’s liquid colours are mixed is a mess (ever sludge and smudge) like puddles on the spirit’s winnowing floor, confusing, to Heaney’s mind, when the creative mind seeks to separate what is aesthetically pleasing from dross.

The muddy wetness of Cooke’s  palette takes Heaney to another place and time: a wet night in Belfast around Christmas. Heaney focuses on a busker who played the saw sheltering in the puddled doorway of a shop, a beggar in the rain, touting for donations at a time when everything around him promoted Goodwill to Men.

As he started his recital, he displayed his carefully maintained and clearly cherished ‘instrument’ and the manual dexterity (pressed light or heavy as the tune required) that produced a range of otherworldly sounds from a carpenter’s tool.

To those familiar with the sounds Heaney’s onomatopoeia describes the modulations and embellishments of the music very effectively – flop-wobble grace notes or high banshee whine.

The light reflecting on the occasional tossed coin reflected people’s meagre response to the man’s performance!

He plays on, lovingly coaxing melodies from the potentially vicious saw-blade his bow caressed and crossed, miraculously surviving the greased teeth intact (unharmed).

Milosz does not mince words, dismissing painting in a crisp rebuffal (daubs fixed on canvas), a paltry thing) in favour of those who set out their emotions in word (what cries out to be expressed).

Milosz is dead, now ‘out of this world’ (indeed Heaney attended his funeral) – his grave is to be found this god-beamed day in his adoptive Poland (coffined in Krakow).

To Heaney’s mind, Milosz would have respected (not have renounced) the ‘tireless messenger’* humbly seeking to produce saw music whatever its quality (however paltry) in his rain-swept existential world (untranscendent) on an inhospitable Belfast evening … 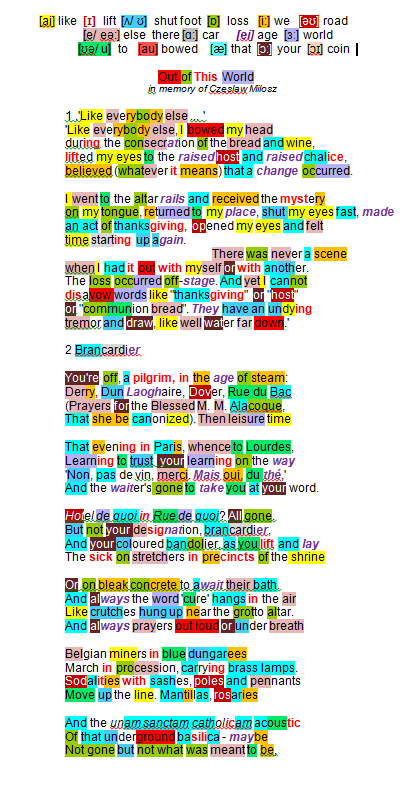