The coldness of death prompts huge questions. The speaker has unearthed evidence of the failure of birds to reproduce. The sonnet moves from a tiny though significant example of biological death, decay and decline to global even universal laws of physics that hold matter in its planetary stand-off.

Here is an example of Heaney’s subtle use of title: merely ‘being present where it happened’ is injected with the urgency suggested by ‘immediate, here and now’ and feelings of discomfort when one is or should be ‘put on the spot’.

On an early-morning walk Heaney has unearthed a cold clutch of last year’s bird- eggs, a nestful, all but hidden and preserved intact by last year’s leaf-mould.

To a country boy the very touch of them (the mattness and stillness) confirms they are dead. Any evidence of health is illusory – mere death-sweat deposited on them by the morning dew that didn’t so much shine the shells as damp them.

For a young man who delights in nature walks (on hands and knees there in the wet) and knows where to look (grass under the hedge) Heaney’s contact is intimate (reached in).

If he had hoped for signs of regeneration (warm eggs) he finds only sudden polar stud … stigma and dawn stone-circle chill. A host of ideas is released: the multiple connotations of ‘stigma’ (the reproductive part of a plant but also mark of disgrace, extending to an emblem of abuse – thinking of the body of Christ nailed to the cross); a clutch-ring of eggs in his mortified palm (the epithet applying at once to the state of the eggs the finder’s numbed arm and his emotional response); a dawn, early day warning, perhaps,  of ‘sacrifice’ associated with pagan Bronze Age stone-circles in Ulster.

Stone-cold eggs offered him an on-the-spot awareness, proof positive of something much more ominous – a conspiracy of circumstances way beyond a microcosmic level of a local infertile bird’s nest – that addle matter, leaving all survival in the balance (planetary stand-off). 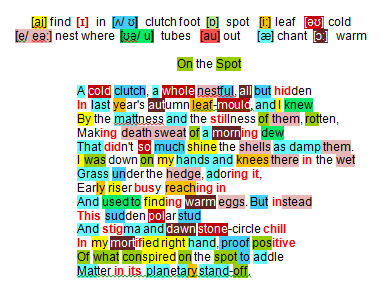