The sonnet sets out at some length the physics and dynamics of wielding a hammer. The energy generated brings with it, however, an understanding of its destructiveness. What begins as a sense of physical reverberation affecting the person using a heavy tool ultimately evokes a shiver of fear when, as contemporary history demonstrates, extreme power falls into the wrong hands.

The tool in question is the weighty sledge-hammer, commonly used by builders and labourers for demolition. Aware of the possible damage to the untrained operator it is clear that the poet/ farmer’s son has handled such an implement and been shocked by its potential.

The poem sets out The way, ‘instructions’ for the safe use of the sledgehammer. Firstly the ‘stance’: the posture required to swing this heavy tool: your two knees locked, your lower back shock-fast (recalling the ‘braced’ snedder), reminiscent to Heaney of a classical defensive military formation, the testudo, which used overlapping shields. The ‘eye’ is drawn up the body via spine and waist to the point at which weight is transferred: A pivot for the tight-braced, tilting rib-cage.

From stance to ‘grip’ of the tool hanging vertically with its blunt iron head as ugly as an oversized, misshapen foot: Unyielding(ly) as a club-footed last (a cast-iron foot-shaped model used by a shoemaker).

Finally the rise and pause of the back-swing: heft and then half-rest, followed by the acceleration like a long-nursed rage/ About to be let fly. It is this reference to anger that invites reappraisal the poem’s real intent.

The poet alters course, raising a question: does it do you good… what benefit, physical, intellectual or emotional, might you have derived from having experienced in your bones the power of a sledgehammer whether literally the impact of your own physical act or by extension the potential power at anyone else’s disposal, directable/  Withholdable at will? How should the poet and by extension all people of conscience be affected by the shiver of such an awesome double ‘clout’, the first of which could all but vaporise solid stone, make air of a wall, and a second so unanswerably landed/ (that) The staked earth quailed and shivered in the handle?

Heaney is suddenly talking about ‘strike’: the power wielded by terrorists flying aircraft into public buildings. 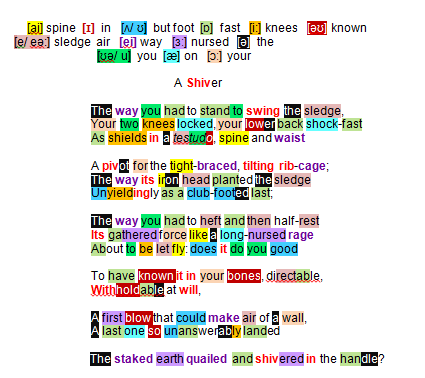