Heaney  recalls two aunts who were very much part of his family upbringing.

Heaney pictures a woman working in the garden: showing little sign of age (young again as the year); neat and demure with tuck and tightening of blouse; active and untroubled by stiffness of the joints (vigorous advance of knee); busy in the vegetable patch (weeding rigs); frugal (the same old skirt and brogues); both well-organised and in charge (on top of things) – in all, a person to be proud of and look up to (a credit)

His eye focuses on her clothing: tweed skirt reflective of rurality (pinpoints of red haw and yellow whin), well used and characterful, its threadbare workadayness hard and common.

The woman herself: decisive (quick step); unsmooth of skin (dry hand; organisation and efficiency that expected success (all things well sped); uncompromising views about her world (her open and closed relations with earth’s work).

Only Heaney can guess whether aunt Sarah’s natural bossiness, her manner or simply the fact of living alone explained the distance he felt when he was helping here: everything passed on without a word.

Notable figures might once have been chaired and held aloft to receive praise – aunt Mary Heaney would have fitted the bill; she shared the family home for a long period in the poet’s early and teenage years, joining in with the work and activities of Mossbawn and The Wood. As she aged she suffered more and more from arthritis and Heaney explained to DOD how he and his brothers carried her up and downstairs before they left home. Heaney pays a genuinely moving tribute to her memory.

As an invalid Mary took little exercise (heavy) and came to require total care (helpless). Help was at hand in the shape of the young men in the family (carefully manhandled). To try and avoid aggravating her pain they moved her every night in a wooden chair.

Thanks to them her daytime might be spent downstairs, watching time pass (the sun sundialled) and noting how its celestial movement distorted light (window-splays across the quiet floor).

Mary and her chair formed a single entity (her body heat had entered the braced timber).

Coping with twisting stairs was onerous: one in front, the second behind (two… tilting and hoisting), the upper one guiding, the lower taking the deadweight (bearing the brunt). The bearers judged their performance from her expressions (not averting eyes from her hurting bulk) sensitive and compassionate (not embarrassed) though never quite at ease with the task.

Mary is dead now and the affectionate, respectful (bent to) goodnight kisses he and the family bestowed on her in her lifetime (warm brow) were replaced by the single kiss of severance at her wake (before we kissed it cold). 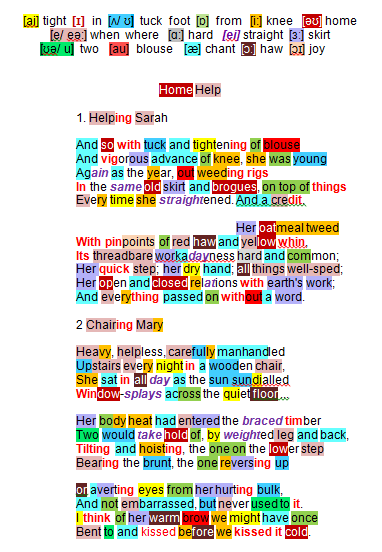