In ‘Stepping Stones’ (p 407) Heaney acknowledges to Dennis O’Driscoll that District and Circle was a time for ‘pouncing’ on poems; the inspiration for this opener was a photograph the poet saw visiting  in an exhibition by modernist artist Hughie O’Donoghue to whom he dedicates the piece. Associated with Heaney’s rural Irish ‘territory’, this manually driven turnip-crushing machine, a piece of archaic agricultural machinery, comes to bear the hallmarks of a medieval war-machine and introduces more modern forms of violence implicit within the first dozen or so poems in the collection

Heaney takes us back a good sixty years to a less sophisticated time before the liquidizer and other modern implements, to an age of bare hands/ and cast iron. The emblems chosen to illustrate the moment (fully recognisable to those who lived through the post-war period) hold a clue to the design of the snedder: the clamp-on meat-mincer/ the double-flywheeled water-pump.

The machine personified by Heaney is solid, obstinate, not to be moved: it dug its heels in… In contrast the yard in which it stands is farm-typical with wooden tubs … troughs of slops.

Sense data associated with touch are introduced: its cast-iron exterior is hotter than body heat/ in summertime, cold in winter/ as winter’s body armour; the implement is depicted as the classical armed-man adding to its solid, uncompromising stance with barrel-chested breast-plate/ standing guard/ on four braced greaves.

Heaney endows his soldier/ snedder with an equally single-minded, unintelligent mentality and voice to match: This is the way that God sees life/… from seedling-braird to snedder. The God described by the snedder evokes Dantesque images and medieval and Renaissance paintings, particularly those of the Last Judgment depicting the fate awaiting poor souls as they are fed into Hell’s ‘mincer’!

The implement exemplifies ‘the turnip-cycle’: it is a metal executioner, beheading turnips and turning them to purée for cattle feed. The snedder appears to derive pleasure from the textures and colours of the liquidization process: juiced-up inner blades … raw sliced mess, bucketful by glistering bucketful. 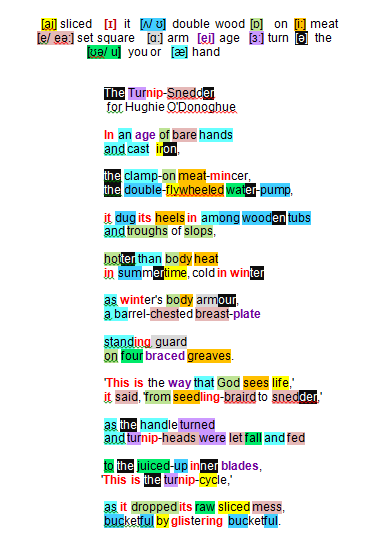