Heaney adopts a serious tone setting out the need for sound construction in relationships; he does so in a very sincere if a touch over-solemn way as if to suggest that taking charge is somehow a male responsibility. In his attempt to reassure them both Heaney is possibly betraying a hint of insecurity in himself.

The building industry provides him with the perfect metaphor for successful marriage: masons insist on the basics from the outset. Maintenance is top priority: they test out the scaffolding to ensure safe passage (planks won’t slip at busy points), provide reliable access (secure all ladders) and stabilize weak spots (tighten bolted joints). Though temporary, the scaffolding is vital to achieve walls of sure and solid stone.

Should occasional (sometimes) flashes of previous, pre-marital existence threaten the solidity of their relationship-building (Old bridges breaking) Heaney offers a comforting response: my dear … never fear. Such moments will not disturb the foundations thanks to that now-redundant scaffolding (we have built our wall). 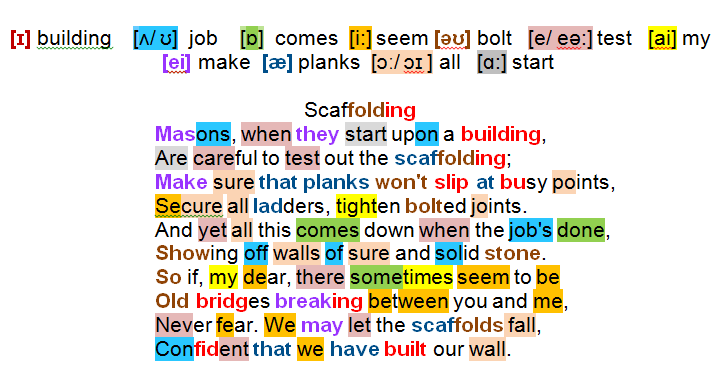