Heaney addresses the threats alluded to in Honeymoon Flight and Scaffolding using the metaphor of a storm-swept island to calm any niggling insecurities in his wife’s newly-wed mind. His deeper meaning emerges: solid foundation and stoic perseverance will secure the couple’s long-term survival whatever short-term extremities life may throw in their way. The storm (from which there is no shelter) is one such ordeal.

A decisive joint-statement affirms that he and Marie have what it takes: they have come to their island prepared, recognizing the best design for durable construction: no high-rise in this climate (houses squat);   solid foundations and materials (walls in rock); sound roofing (good slate).

The weather-beaten (wizened) terrain accustomed to ruthless elemental attacks is stripped of what cannot survive there: no hay… no stacks/ Or stooks that can be lost.

Without trees and their companionable presence in a storm (company when it blows full/ Blast), the pain the storm seeks to inflict is indiscernible to the ear (no tragic chorus in a gale/ So that you listen to the thing you fear) in contrast with the noticeable buffeting (pummels) the house is receiving.

He counsels: do not underestimate far-away threat/ the distant sound of the sea Exploding comfortably down on the cliffs; to doubt its potential impact would be self-delusion (the flung spray hits/ The very windows); on this island/ in this life today’s calm is tomorrow’s mayhem (spits like a tamed cat turned savage).

The way for him and Marie to survive the repeated impact of Nature’s/ life’s blitz (where the wind is a war plane that dives/ And strafes invisibly and Space fires a salvo of incoming shells) is to batten down the hatches (just sit tight).

The poet plays down the scary paradox he perceives: the air, insubstantial (empty) yet capable of bombardment, impossible to grasp (nothing) yet massively powerful (huge), will not be allowed to threaten their solidity: Strange, it is a huge nothing that we fear. 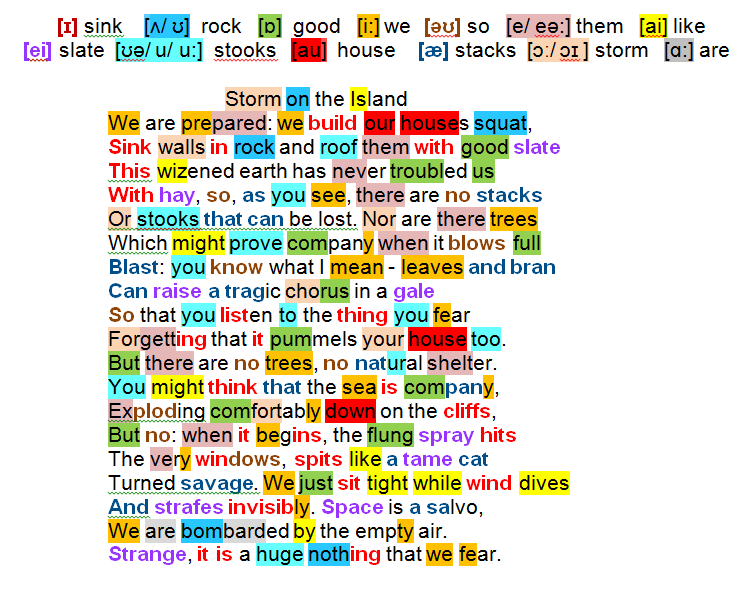