Using an extended metaphor Heaney draws a parallel between the act of faith required to board an aeroplane and the concerns that newly-weds harbour. The ‘flight’ is both a literal plane journey and, figuratively, an intentional move into uncharted territory, less a reference to the post-marital event than metaphor for the journey required and undertaken to achieve durable togetherness.

Heaney has a bird’s-eye view (Below) of Ulster beneath the flight-path (patchwork earth, dark hems of hedge). Its landscape recalls the symbolic rituals of the recently celebrated wedding: roads resemble the long grey tapes placed symbolically by the priest across the hands of bride and groom to unite the couple (bind), mirroring the loose road-network linking the Irish countryside in casual marriage.

The emotional security (Sure) of his familiar Irish (green world) country-scape (small lough and farmhouse) is unbalanced (goes topsy-turvy) by the changing wing angle as the plane veers (we bank). Their familiar landscape is further unsettled by changes in the sound of the plane’s engine ( even though he knows subliminally that they have elected to change direction, wavelength, landscape, lifestyle, world). Unfamiliar shifts generate questions and mutual support-signals provide confidence: engine noises change. You look at me.

As Ireland is left behind, the miraculous physics of air-flight feed the metaphor: the thrust of the jet engine and its force of fire act as a launch-pad for a young, optimistic couple; the jet’s aerodynamics rely on invisible air to hang … dependent; the plane acts as a vehicle of progress (bring us further) rather than simply marking time (remaining airborne); thanks literally to the physics a perceived danger (the water below) remains precisely where it is.

The view ahead of us, the metaphorical future, conceals some rough currents of air: married life’s flight-path storms (the sky’s a geyser now) will require navigation so, despite (yet) the still small voice of calm … we feel lost. Turbulence will bring moments of anxiety (air pockets jolt our fears) and dent morale (down we go)

But, committed to the journey, inexperienced air passengers-newly-weds must cross their fingers: Travellers at this point can only trust. 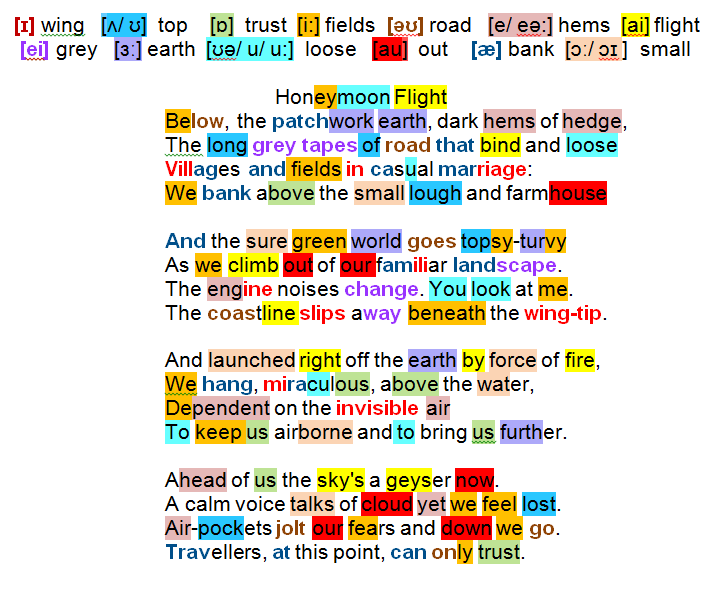