The title’s  play on the word break (‘time off school ’) refers more poignantly  to a tragedy to which Heaney was exposed at the age of fourteen and led to a moment of severance that would affect his whole life.

From peculiar changes in his daily routine, via stages of dawning reality, to the heart-rending visual impact of a corpse laid in its casket, Heaney comes to understand the irreversibility of his younger brother Christopher’s death (as result of a car accident in February 1953).  Driven home from school he responds impassively to the reactions of family and neighbours before coming face to face with his deceased brother and finding a form of words that expresses the bitter irony.

The schoolboy is segregated in the college sick bay; his unquestioning mind wiles away the time Counting bells knelling classes to a close (the word-choice provides the reader with a sense of foreboding that the youngster has not yet grasped for himself).

However out of the ordinary ‘others’ picking him up may have seemed, once home, he came face to face with his father in tears, unprecedented in a man who had always taken funerals in his stride; then he is embarrassed by the  protocols of condolence of neighbours: a hard blow … shake my hand … ‘sorry for my trouble’. Only the baby in its pram, unaffected by events, seems pleased to see him for his own sake. He is aware of whispered remarks within the gathering about his status in the family (the eldest/ Away at school). He registers his mother’s grief-stricken responses (coughed out angry tearless sighs).

His young mind registered the precise time Christopher’s body was brought home to lie in the family home, by what means (ambulance) and in what state: the corpse stanched and bandaged by the nurses.

Next day the boy stood before the coffin where, symbolizing the fragility of both beauty and innocence, Snowdrops/ And candles soothed the bedside. He notes the pallor and the poppy bruise on a face as much asleep as dead, otherwise spared of ugly bruising: No gaudy scars, the bumper knocked him clear.

Faced with one so dear, so young and so small the boy is suddenly hit by the enormity of it and finds the only way he knows of expressing his pain: an emotionally powerful schoolboy-like mathematical sum: A four foot box, a foot for every year.

The poem succeeds very movingly in meshing different themes: the sense of finality that hits the speaker only slowly; the silence and solemnity of the Irish Catholic pre-funeral process itself; how grief affects people differently. 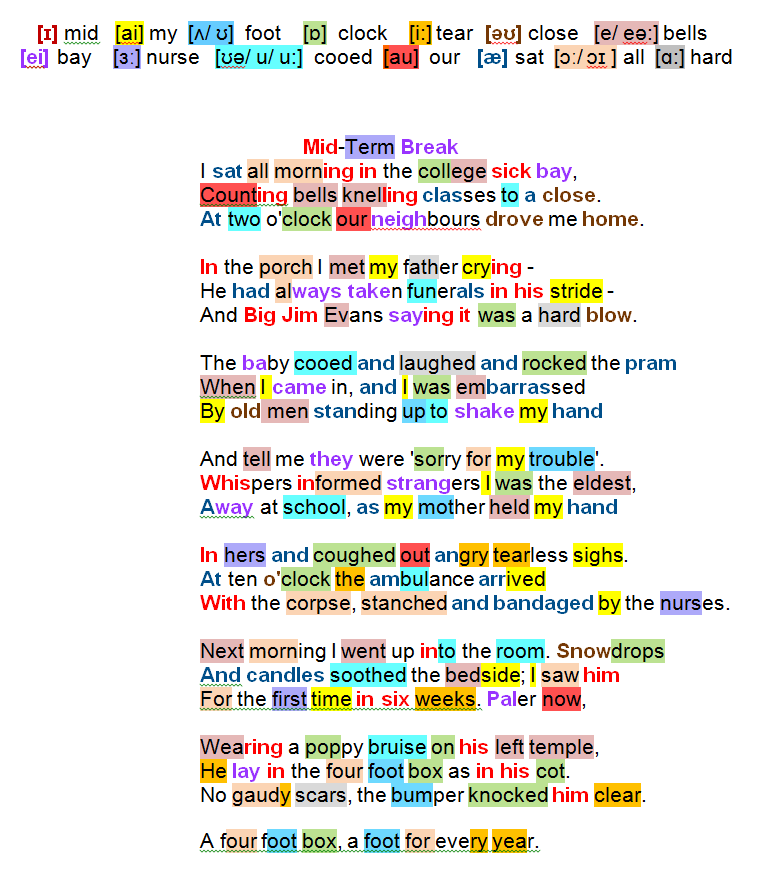