The title is borrowed from totalitarian politics where ‘purges’ removed elements deemed ‘undesirable’ by those in power. Heaney applies it to the cruel realities of farm-yard life as he experienced them as a six-year-old. A youngster’s innate feelings are challenged.

The boy has a conscience and sympathies but (as Heaney, perhaps, later in the Troubles) is never an active contributor to violence;

The young watcher’s compassion is aroused by the sounds of their clawing attempts to survive (frail metal sound), the last throes of panic (Soft paws scraping like mad) and the ease with which life could be snuffed out: a tiny din … soon soused.

The ideologue claims the kittens are better off dead; the boy, however, has clear misgivings, preoccupied with the waterlogged corpses (Like wet sponges, they bobbed and shone) and the humiliating disposal: he sluiced/ Them out on the dunghill, glossy and dead.

Scared yet mesmerised, the youngster could not readily forget what he had witnessed, returning to follow the process of decay: sogged remains/ Turn mealy and crisp as old summer dung. He might have forgotten this single episode of inhumanity were it not for the routine acts of the farmyard executioner (trapped … snared … shot … pulled necks).

However, whatever his initial misgivings the farmer’s son comes to accept the farmyard attitude (still), acknowledging that reality creates necessity (living displaces false sentiments), that unregimented reproduction leaves too many mouths to feed: shrill pups are prodded to drown.

The boy opts to go with the flow: (I just shrug) adding insult to injury and mimicking his early ‘mentor’ (‘Bloody pups’) to salve any conscience: It makes sense.

Those ‘early’ farmyard attitudes have been replaced at this stage in Heaney’s life by post-graduate contacts and middle-class Belfast dinner tables where libertarian opinions are expressed: ‘Prevention of cruelty’ talk cuts ice in town. The poet, however, is ready to argue the rural Ulster corner: on well-run farms pests have to be kept down. 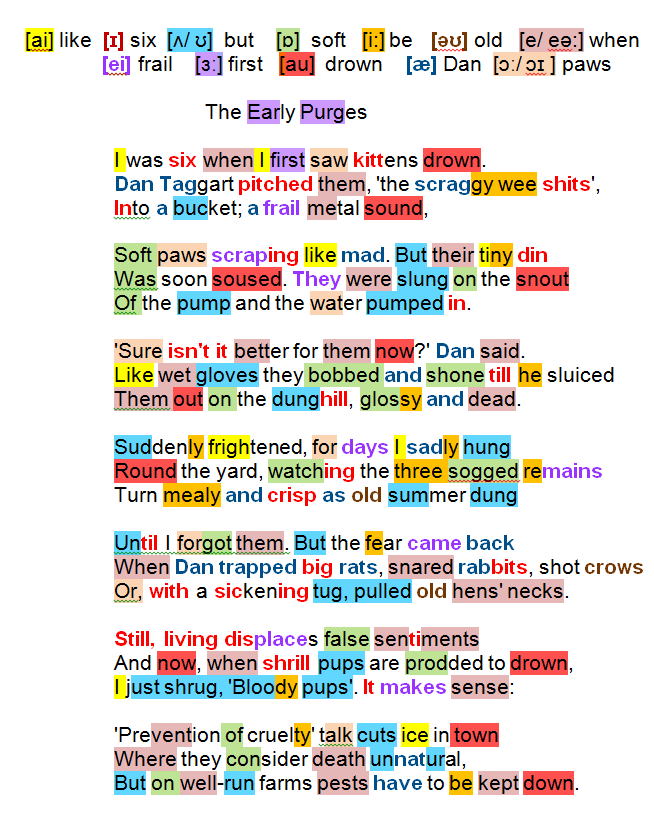