Heaney expresses his respect and love for his father, explores his own place in the family line and, in observing the toll that time takes on Man, sets out a paradox that is evident to him twenty years on.

The poet paints the rural portrait of a strong, silent father from twenty years before: an impressive sight then, a tall-ship (shoulders like a full sail strung); a man at work in the fields, in full control of plough and horses (between the shafts and the furrow). In short, to his admiring son, he is a hero (expert) adept at positioning the plough’s wing and bright steel-pointed sock so as to produce the perfect sod rolled over without breaking, controlling his sweating team with minimum effort; assessing his task with unerring skill (Mapping the furrow exactly).

Then Heaney was the child who, clumsy in comparison, dogged his father’s heels (stumbled in his hob-nailed wake/Fell sometimes); he was a pest benefitting from his father’s strength and love, riding on his back/ Dipping and rising to his plod.

At that moment Heaney might have dreamt of following in his footsteps (grow up and plough/..close one eye, stiffen my arm), yet learned from toddling In his broad shadow round the farm, a persistent nuisance, tripping, falling, yapping always that the farming life was not for him.

Irony of ironies: the time–line that was to lead Heaney in the direction of poetry took its toll on his father, ageing him and reversing the situation: today/ It is my father who keeps stumbling / Behind me, and will not go away. 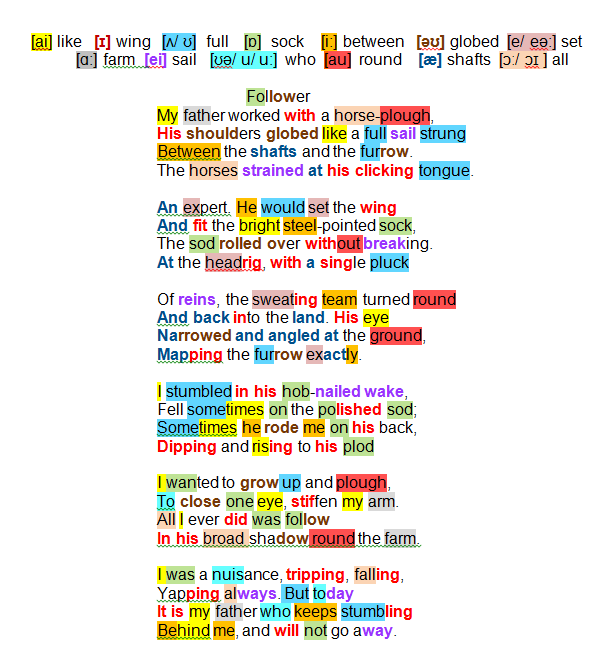