In a dark setting unrelieved by any chink of light Heaney pursues the issue of Irish suffering at the hands of the British (the 1845-8 famine conditions were introduced in Potato Digging iii). He describes an incident that upholds the poem’s epigraph and accounts for the burning sense of injustice still felt within the Irish psyche over 150 years later.

The epigraph (drawn from The Great Hunger; Ireland 1845 – 49  by Cecil Woodham-Smith) sets out the visual manifestation of suffering  on Irish ground and the absence of compassion further up the chain of command; the most dismissive are the loftiest who hold the whip hand in London. CWS cites Routh Russell, a contemporary provider of reports on the Irish situation. The period is judged to be an indictment of British ‘foreign’ policy, an indictment of a form of ‘imperialism’ in which the better feelings, altruism and compassion of those exposed to Irish hardship are rejected by distant governors.

The initial voice and responses are those of the commander of a British Coast-Guard vessel in the late 1840’s and the poem itself is couched as his written report to his seniors.

His ship’s presence in the bay is routine but the incongruous presence of an Irish rowing-boat unusually far beyond the creek is sufficient to arouse suspicion. The captain’s challenge delivered in Gaelic is enough to halt the craft’s enfeebled progress (weakened) as he seeks the motive for their presence: guilt or bashfulness.

A shocking scene confronts him (O my sweet Christ): six grown men piled in the row-boat displaying all the symptoms of sickness and starvation: gaping mouths … eyes bursting the sockets … six wrecks of bone and pallid tautened skin.

Desperate need of food (bia, bia, bia) is their reason for being there; their appeals for succour are half beseeching, half animal (whines and snarls).The commander has heard of food shortage amongst the population but he and his crew are above it, amply provided for (flour and beef).

He wants the world to know (So understand) that his better feelings and desire to help these poor brutes are superseded by policies dictated by his naval and political masters (no mandate to relieve distress … had to refuse), despite condemning them to certain death (never make it).

The men respond despairingly: they cursed and howled like dogs/ That had been kicked hard in the privates. The commander has made his decision; to rid himself of moral scruples (and to keep in with his masters, of course) he uses their ferocious response (drove at me) as proof of their undeserving natures (violent and without hope), providing grounds for turning his back. Less incidents the better.

Later, however, an unstated whiff of conscience, perhaps, he absolves himself by scrubbing away the memory of the six bad smells, those living skulls, using the Church’s most powerful spiritual cleanser of evil: I exorcised my ship.

The poet’s voice takes over, all the more effective for its measured tone and head-shaking disbelief: crediting Sir James Dombrain for seeking free relief/ For famine victims in the Westport Sector Heaney rejects the British government’s response as dismissive (tart) and unworthy (good Whitehall).

The situation is heavy with irony: new Prime Minister Trevelyan’s view was that heaven helped those who helped themselves: Let natives prosper by their own exertions (impossible for them as Heaney has shown);  Who could not swim might go ahead and sink (inevitable from what we have just witnessed).

For distant, absentee masters any relief of Irish hardship dictated by the commander’s zeal, humanity or compassionate nature amounted to extravagance (too lavish). 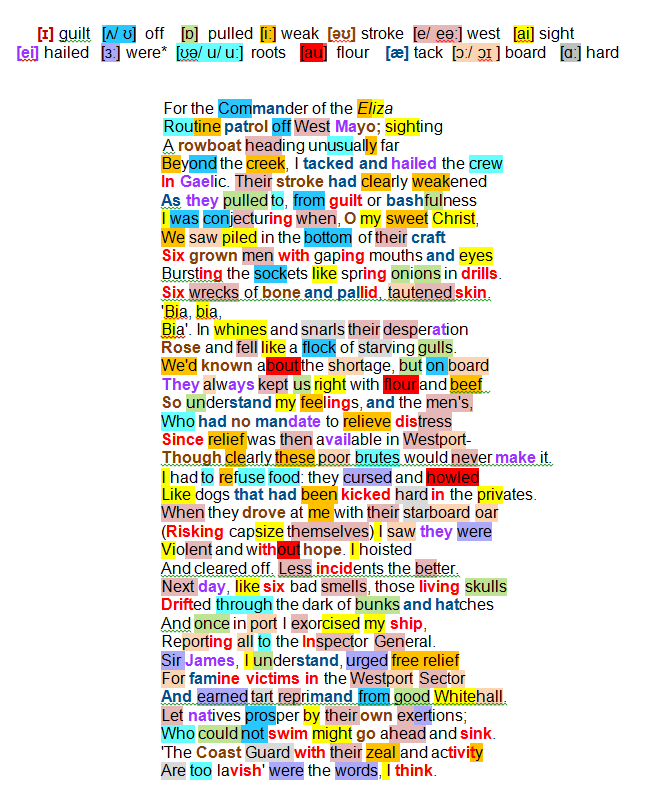