Heaney delves into the Irish ‘underlay’ (things that make Ireland magically special and unique for him) depicting a talent that, to onlookers, verges on the miraculous. At a different level the poem alludes to the transmission of the poetic message and the magical talent of the poet; its title is ideally chosen to introduce the ‘extraordinary’.

The dowser (called in to locate underground water) goes about his task in a calm and professional way. His equipment amounts to a forked hazel twig, living wood from a green hedge which he grips tight by the arms of the V. He walks in circles so to capture a signal from below ground (the pluck of water) as distinct as the note made by a string-player’s fingernail. His manner is acutely sensitive to movement from the stick (nervous) yet controlled (unfussed).

The dowser is no showman: he rises modestly above it all, well used to the curious who wonder whether they share his magic touch. He knows he can demonstrate his gift by nonchalantly exploiting their failure (the rod dead in their grasp). Gripping their eager expectant wrists he uses his own hands as ‘jump-leads’ whereupon, as if by magic, his intervention completes the energy circuit: The hazel stirred. 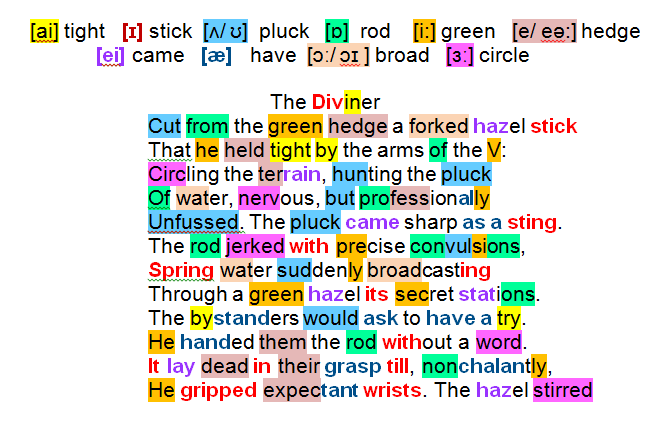