A burlesque drama is played out in the guise of paramilitary exercise.  Two macho Laurel and Hardy ‘heroes’ are motivated by official bounty payments that could be claimed for killing listed vermin. Their pursuit of financial reward is long in build-up and over in a flash; relative failure is written off as hardly worth the effort anyway! The poet chuckles at the laddish mentality exhibited by the narrator and his companion, Donnelly.

The inhospitable dawn sky is as grey and damp as building materials:  Clouds ran their wet mortar, plastered the daybreak.

The bounty-hunters are en route to the ‘killing fields’, along a railway-track, disturbing stones that clicked tartly underfoot and compromised the surprise factor (mostly silent). Too early for trains… the only steam was funnelling from cows, recumbent (Ditched on their rumps), chewing away (Cudding), watching and all but passing judgment on two unlikely combatants (knowing).

The narrator sees marksmanship skills everywhere: The rails scored a bulls-eye into the eye / Of a bridge.

The pair’s military field-craft is poor and attempts to avoid detection frustrated by startled opposition recognizable by its distinctive call (A corncrake challenged/ Unexpectedly like a hoarse sentry) or unique flight pattern (a snipe rocketed away on reconnaissance).

Kitted up for the mission like wartime commandos the companions look the part: Rubber-booted, belted, tense as two parachutists.

They navigate the first obstacle with assault course efficiency (climbed … dropped) and make for cover (a sandy bank, reinforced with coiling roots) from where, comfortably prone (snug on our bellies), concealed behind dead whins and hungry for a kill (ravenous eye), they overlook the target area and lay their ambush (the holes under cover).

A country boy can sense the rabbits returning to their den ( ) Loping under ferns, using natural cover in dry drains, alert to anything abnormal: flashing/ Brown orbits across ploughlands.

Increasing daylight whitens the grey (thinned plaster at the skyline … whitewash ( ) bleaching on houses and stables. In best army-barracks style the wake-up call is imminent: the cock would be sounding reveille/ In seconds.

The first rabbit, condemned as a flashy and reckless playboy trotting up to the hole, is just what the narrator has been waiting for but to his exasperation (I spat) Donnelly pulls rank, claims the prey and empties both barrels with a mocking tribute (‘Wild rover no more’) drawn from a popular Irish folk-song.

The silence is shattered (Another snipe catapulted … A mare whinnied and shivered), the rabbits have fled. Determined to have played some active part, the narrator reveals he discharged his gun, too.

Initial pseudo-military purpose has lost its appeal and is replaced by sauntering laddishness: they dandered off leaving the dead rabbit behind. The bounty payment is written off so no need to provide evidence (cut out the tongue). The remaining rabbits that slipped back when the all clear got round would confirm the outcome. 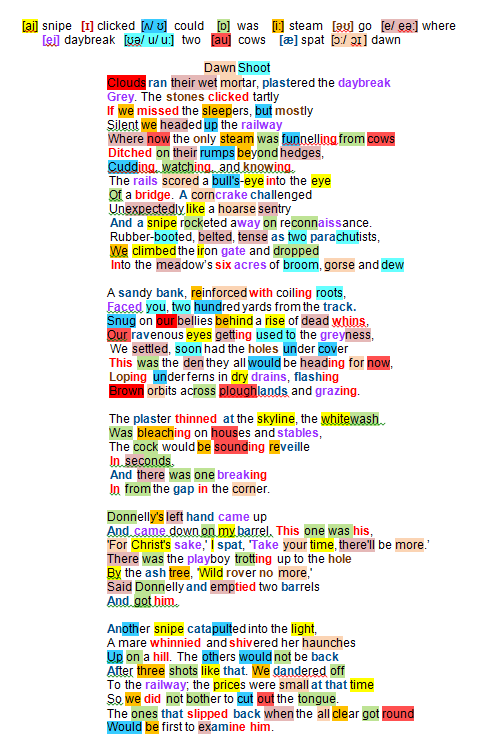