Heaney builds his sympathy for the Irish condition into this bleak sequence via particular reference to the great misfortunes suffered by his fellow countrymen during the Irish potato famines between 1845–8. All four poems explore Irish dependency on its staple potato crop. Heaney is asking why anyone should be surprised at long-term Irish grievance resulting from the non-response to rural hardship of those who over history have imposed insensitive government from Whitehall in London.

In many cultures Mother Earth (presented here as a divinity worshipped in Ireland on the altar of the sod) presides as a pre-Christian symbol over planting and harvesting. The legendary importance to the Irish of the potato crop explains the reverence Heaney lends it. This first piece, a bird’s-eye view, is set in ‘modern’ times.

The first stage of the potato-harvest is mechanised and brutal: A mechanical digger wrecks the drill.

What follows is labour-intensive, manual and age-old (Labourers …/ Wicker creels) under even the most inhospitable conditions (Fingers .. dead in the cold).

Verbs describe both back-breaking labour and reverence: stoop … bow … bend. The paired figures only stand upright (tall for a moment) to carry full baskets to the pit (where the potatoes are preserved) before they stumble back and like trawler-men fish a new load from the crumbled surf.

To Heaney this subservience is born of hardship: Centuries / Of fear and homage to the famine god have developed an Irish body-shape (toughen(ed) the muscles behind their humbled knees), ready-made to bend in annual prayer for a successful harvest: Make a seasonal altar of the sod.

South America’s Pacha Mama figure (Mother Earth)and the first potatoes grown there from 2500 B.C., were brought from Peru by the conquistadores and probably introduced in Ireland around the time of the Elizabethan conquest of Ireland; Heaney hints at this pre Christian element in i and iv.

The poet’s eye zooms in on the potato-drill to settle on the haphazard scatter of potatoes. Sense data abound: initially the tuber’s colour variations (Flint-white, purple); then the smooth touch and rounded shape like inflated pebbles; the likeness to caged animals in the soil (Native/ to the black hutch of clay). From seed potatoes, cut in two for maximum yield, the tubers grew (shot) and coloured(clotted) developing texture (knubbed) and human features (slit-eyed), they lie now like petrified souls in the hearts of drills, in anticipation of mass graves alluded to at the end of the piece.

Torn potatoes reveal(white as cream) and a smell that Heaney’s experience confirms as healthy. He knows the rich, crusty Irish ground (the rough bark of humus) that disgorges (erupts … knots of potatoes born of the Mother earth); what he holds in his hand – their solidity, their wet insides –  heralds  the taste of ground and root, the flavours they will offer to the tongue.

Via the live skulls image of dead men walking in ii Heaney’s mind has triggered flash-back to the potato famines of the late 1840s.

He recounts the fate of those caught up in it, the gaunt, confused Irish (wild higgledy skeletons) who scoured the land for nourishment, were so famished that they wolfed the blighted root and died (cause and effect described with fatal simplicity).

The devastating speed with which the blight reduced millions of potatoes from sound as stone to putrefied in a matter of days resulted in unfolding hunger and emaciation witnessed in their bodies (eyes died hard/ faces chilled) and comparable to dead poultry on the butcher’s slab (a plucked bird); without exception (In a million wicker huts); accompanied by vulture stabs of stomach-pain (beaks of famine snipped at guts).

Heaney’s famine metaphor signals his view on the history and condition of Ireland as a whole: a people hungering from birth, reduced to scavenging for sustenance (grubbing) a race marked (grafted) with a sense of worthlessness (great sorrow) sufficient to defeat aspiration (hope rotted like a marrow).

Both metaphor and reality (stinking …fouled… pus… filthy) trumpet Heaney’s conviction: those in political power who repeatedly failed to address poverty and famine-death in Ireland, who even blamed the Irish themselves for their condition, are responsible for on-going resentment: you still smell the running sore.

Return to modern times from the dark narrative of iii has brought a lightening of mood: beneath the gay flotilla of gulls that scavenge the fields, the pickers enjoy a welcome break of healthy food and tea in bright canfuls.

Dead-beat they flop, exhausted but no longer at death’s door, treated to as much refreshment as they can consume (take their fill) eating their first meal of the day as of tradition: breaking timeless fasts. Ditches now bring them shelter not disease.

Celebrating the bounty of Mother Earth they make a double offering: spill/ Libations of cold tea, scatter crusts (note on the altar of the sod of poem i)

Here perhaps lies the sting in the tail: replacing the wine and host of Holy Communion with a non-Christian equivalent somehow challenges the ‘Higher Purpose’ that permitted such past suffering and rendered this faithless ground unhallowed. 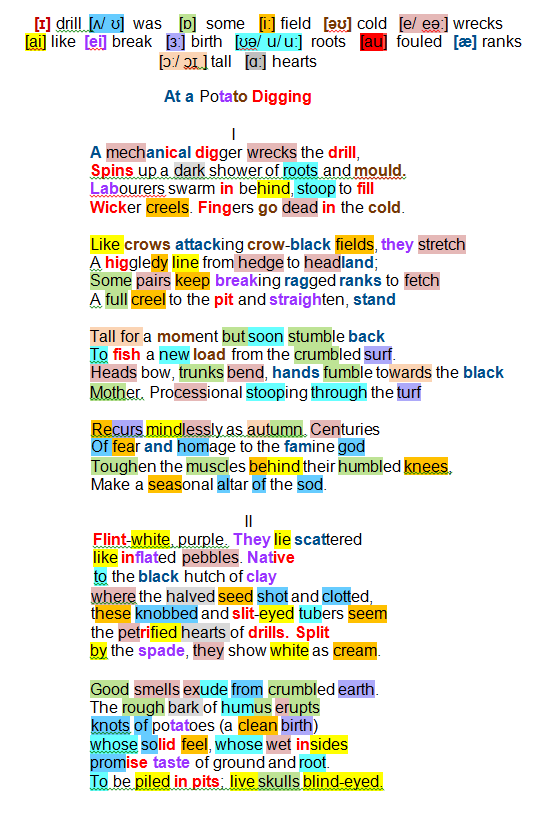 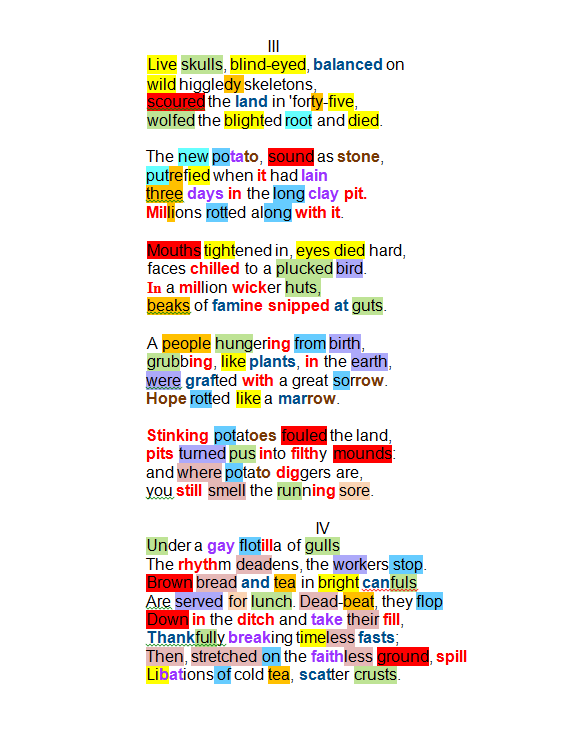 The sequence as a whole: