A brown-tinted study of the family’s past is to be removed from the wall where it has been hanging. The study is a revealing snap-shot of the person it depicts conjuring up three generations of the Heaney human chain.

The poet transposes the photo into words: that of a proud Irish countryman (with jaws that puff) of seemingly indestructible build (round and solid as a turnip), his lifeless, matt (dead) eyes (fixed by the camera’s shutter) like those of a statue, the facial features suggestive of a dour, overbearing nature: upper lip/ Bullies the heavy mouth down to a droop.

His accessories (a bowler-hat and well-to-do watch-chain of silver … like a hoop) lend him a theatrical stage Irishman appearance with facial expressions that betray his nature: half arrogant (scorn), half  impassive and unemotional  dead-pan.

This is the poet’s great-uncle, a wheeler-dealer instrumental in teaching Heaney’s own father a thing or two about the cattle trade two generations back.

Both the man’s memory and the quality of his portrait have paled with time; the picture must come down; removal reveals a faded patch on the wall where it has long hung akin to the lighter shade left by a bandage … ripped from the skin, a blank space (empty plaque) marking a moment of family history: a house’s rise and fall.

Heaney moves on a generation, setting out the hierarchies, wheeling and dealing and rituals of an Irish cattle market. He claims he was there, given a menial task (herded cattle) whilst his father bartered successfully (won at arguing/ His own price on a crowd), where buyers tested the cattle (handled rumps, groped teats) and once a deal had been agreed bought a round of drinks to clinch the bargain.

What was true of Irish rural practices when Heaney witnessed them held good (too) thirty years earlier. The poet recalls Uncle and nephew (his great-uncle and his father as a young man) as they heckled and herded through the fair days. The great-uncle of the portrait (penned in the frame) would provide the business patter with his barrel stature and jaunty hat pushed back; his body-language (curtly smack/ hands to indicate that a deal was clinched) was the model later adopted by his own father.

In retirement Heaney’s father deplored change: the replacement of stock-fairs by auctions, the disappearance of strong characters he had known and the bargaining. He wrote off the present generation as farmers going to the shops (Like housewives at an auction ring).

Just two items of that past remain: his father’s stick (emblem of his cattle-controlling days) untouched since it was left parked behind the door; and ironically (Closing this chapter of our chronicle) the Ancestral Photograph itself, about to be stored away in the attic. 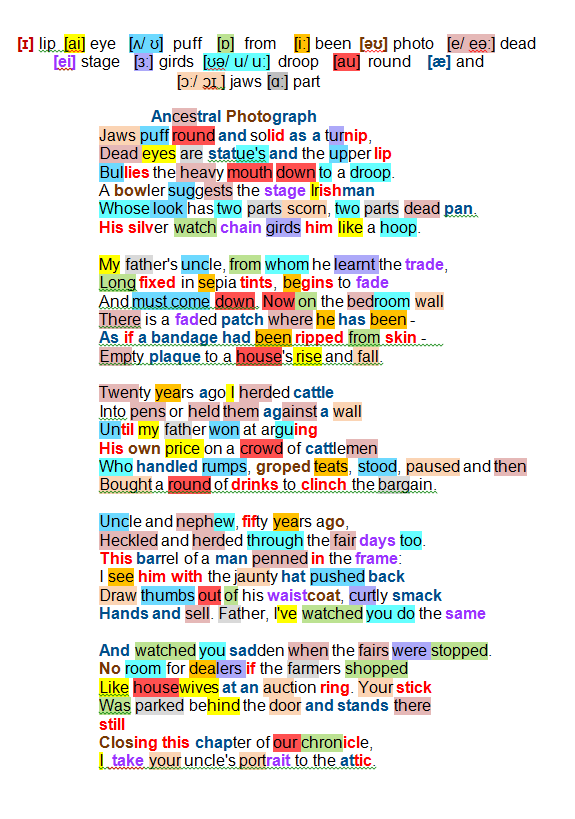