Seamus Heaney tops and tails Seeing Things with his own versions of passages from classical masterpieces, the first snippet borrowed from the pre-Christian classical mythology of Virgil and ending with a Dante passage from the Christian era. In both cases the narrative is not Heaney’s as such, but he employs all his compositional skills to produce a polished translation.

In conversation with DOD (p319) Heaney explained how the collection’s texts linked up:  the relation­ship between individual poems in the different sections has some­ thing of the splish-splash, one-after-anotherness of stones skittering and frittering across water. Thus the collection’s themes, motifs, moods and key words pop up at intervals just as a flat stone rebounds across the water’s surface.

The Aenied bookend is significant within the context of the collection. Heaney will rework in Seeing Things many of the challenges Aeneas is faced with: the poet’s love for his deceased father, Patrick Heaney leads to a similar quest for a face-to-face meeting with his father’s shadow and introduce an elegiac tone; Heaney will ponder the post mortem destination of the dead from both Catholic and mythological angles exploring truths and mysteries; he will look up and search deep as he revisits primary experiences to ‘credit marvels’ he did not recognize when he first met them.

Heaney will not waver in his poetic quest; he will refer repeatedly to the limits that life and poetry have thrown up; he will identify hidden places; words like roof, limit and face to face will recur and resonate. Indeed, Virgil provides an immediate introduction to the Squarings section, not least the point at which poems reach the interface of life and death, certainty and doubt.

Aeneas is faced with the actions of the priestess in her holy place (shrine) that preceded her pronouncements: a ritualistic mumbo-jumbo (sayings where clear truths and mysteries/ Were inextricably twined) of ambiguous language (fearful equivocal words) and convulsive contortions controllable only by a divine: Apollo … reined in her spasms.

Only when normality is restored (her fit passed away and the mad mouthings stopped) can Aeneas petition (pray) the Sybil: his status (heroic), fearlessness (No ordeal  I cannot cope with) and his determination to overcome personal grief (I have foreseen and foresuffered all) work in his favour

The object of Aeneas’ petition will provide one of the corner stones of the collection: one look, one face-to-face meeting with my dear father. Heaney’s own father died in October 1986 and will be remembered in Seeing Things. To achieve his aim Aeneas, still undead and undamned, requires the access code to the Underworld: Teach me the way and open the holy doors wide

Aeneas, son, was dutiful (carried him on these shoulders) in battle and on his travels (at my side then through all my sea­ journeys); the aged father ever purposeful: worn out yet holding out always.

In fulfillment of a pledge (his father … half-prayed and. half-ordered me), Aeneas places himself at the mercy of the Sybil whose god-given power can make it happen. There are precedents: Orpheus was offered the opportunity to retrieve the shade of a wife (Eurydice) through his faith In the loudly plucked strings of his Thracian lyre. Other heroes and divines followed the same route to the land of the dead. His credentials are peerless: of highest birth, a descendant of Jove

His petition is interrupted: the Sybil acknowledges his status (blood relation of gods) and noble background (Trojan, son of Anchises).  She warns that access from Avernus is easy via Pluto’s ever open door; the return journey to upper air is the real challenge, successfully met by very few well qualified petitioners (sons of gods … or exalted to heaven  In a blaze of heroic glory)

She sets out in graphic terms the ordeals that lie in wait but, recognizing the depth of emotion involved (if love torments you so much) and Aeneas’ determination to surpass himself  (if you will go beyond the limit), she reveals the way to proceed : find the hidden bough made of gold …sacred to underworld Juno … roofed in by a grove

The bough is the passport to the earth’s hidden places a token to be handed on to fair Proserpina, to whom it belongs; no damage will be done to the tree: A second one always grows in its place, golden again And the foliage growing on it has the same metal sheen.

First find it (look up and search deep); once found do not waver: Take hold of it boldly and duly.

Providence will have the last word: If fate has called you, The bough will come away easily. If not, try as you may (no matter how much strength you muster) you will not succeed: you never will manage to quell it or cut it down with the toughest of blades 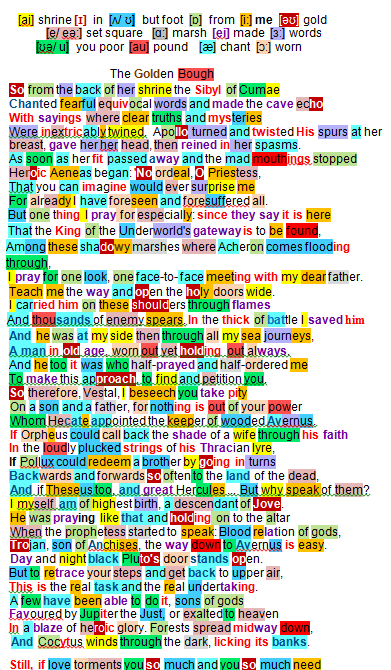