Heaney offers his reader a clue as to how to ‘enter’ the Squarings sequence: You could think of every poem in ‘Squarings’ as the peg at the end of a tent-rope reaching up into the airy structure, but still with purchase on something earth­ier and more obscure (DOD 320);

Heaney reported on a period of feverish activity as the Seeing Things collection was taking shape: I was pouncing for twelve lines on all kinds of occasions, chance sentences from my reading, chance sightings of dictionary entries, such as the words ‘lightening’ and ‘offing’ (xlvii xlviii), chance visits to places that unlocked the word hoard (DODp.325).

When you are a poet eager to pounce on something with a poetic charge, blink and you might miss it!  Heaney uncovers a mental tension that haunts him – happenings of import lurking just beyond his mental reach. The poem reveals the inner mechanics of the creative mind … his at least (and he admits he finds it all a touch ‘strange’ in the next and last Squaring).

He figures himself on the qui-vive like a sailor or coastguard focussing on open water (visible sea at a distance) beyond the area where boats are moored (anchoring grounds) … the stretch between there and the horizon (offing).

This is where things happen and he does not want to miss them. The more there is nothing there (emptier it stood) the greater the creative need (the more compelled) to keep looking (the eye that scanned it).

A kind of obsessiveness creeps in should he look away (your back … suddenly all eyes like Argus’s). Any lapse of poetic watchman duties creates doubt: when he looks again and still sees nothing (the offing felt Untrespassed) yet the nagging fear prevails that something has been and gone, the empty roadstead somehow vacated.

His imagination is in full flow: he senses a gathering miltary threat (troop) bearing the glow some higher spiritual endorsement (lambent), engaged in military preparations (exercised) within the swirl of Heaney’s mental activity (On the border of your vision … a temporary absence (withdrawn), invisible but there (Behind the skyline), intent on manoeuvre and regroup before bearing down on the shoreline.  … Mmm … anything from the occupation and abuse of Ireland of the Queen Elizabeth I era to the sectarian troubles of the twentieth century that they spawned

Heaney will pick up the stress of the poet as an all-seeing, all-knowing watchman in Mycenae Lookout of Spirit Level (1996). The sequence deals with the murderous events following the sacking of Troy and the return home of Agamemnon. One of the watchman’s duties was to warn the palace of impending attack. He might have changed the course of events had he done his job properly. 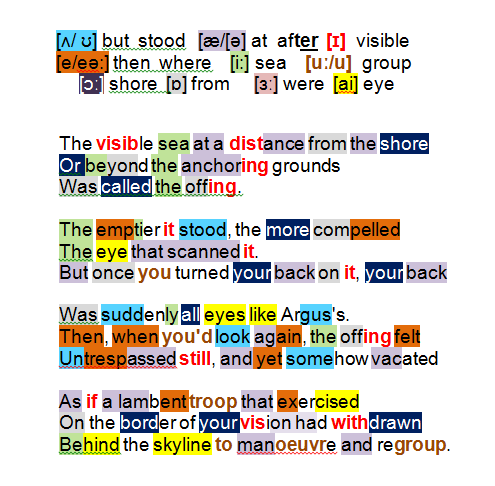