Heaney offers his reader a clue as to how to ‘enter’ the Squarings sequence: You could think of every poem in ‘Squarings’ as the peg at the end of a tent-rope reaching up into the airy structure, but still with purchase on something earth­ier and more obscure (DOD 320);

The poet recalls what he might term the perfect moment.

An end-of-summer event, alive and brimful: at the poet’s back the feel and sight of empty upland (Mountain air from the mountain); in front of him Irish landmarks (stone-walled fields … a slated house); in the air an unmistakable Irish music (the fiddle going) its unbroken momentum as persistent as the skittering ricochets across water of a flat stone skimmed at sunset; a sound capable of escaping the earth’s pull (irrevocable slipstream of flat earth) and echoing infinitely: Still fleeing behind space.

If music was regarded by some as a manifestation of God’s presence in the world and thereby a proof of His existence, then, to Heaney, once a humble Irish fiddle provides a sublime moment (things beyond measure), then fine, but why waste time debating the issue (that supposition stands).

Better, as he once did, to turn his ear and his attention (like a farmhouse window) when conditions were just right for listening (placid light) to the transcendental properties of the fiddle’s tune: its variations on a theme (the extravagant), its unstoppable forward movement like a ship under full sail, the thrilling outcome for both his senses and mind that only a perfect moment could produce (the longed-for).

MP 221 As the first poem of ‘Lightenings i’ implies, Seeing Things is full of ‘Unroofed scope’, ‘Knowledge-freshening wind’, ‘soul-free cloud­ life’. Though the old hearth, and the old certainties, may now be cold, they retain an afterlife in his imagination. One cannot imagine Heaney not returning to them to rekindle memory, to admit ‘things beyond measure’; 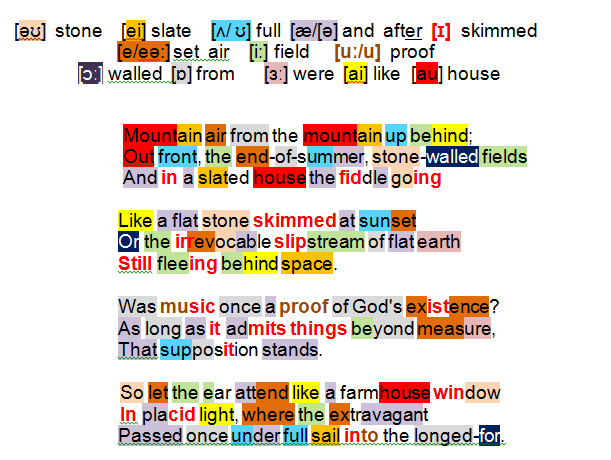