The ‘Settings’ sequence presents a chain of backdrops against which personal events and dramas were played out. Within the dynamic period preceding Seeing Things when Heaney deliberately swooped on anything that stimulated memory or association (DOD 320),  he allowed himself to be transported back by the poems that ‘came on’ to the sites, caricatures and emotions of primary experience, whence he weighs up what ‘in time … was extra, unforeseen and free’ (Markings I).

A precocious youngster comments on a fall from power; his over-fifty-self credits that early discrimination.

He watches the smutty routine of an individual who thinks highly of himself (a foul-mouthed god of hemp) but who gives his basic instincts away (come down to rut). The man’s presentation is loud and brash (stumped about) and his double-entendres are heavy with male sexual innuendo (how thick it … how long and strong… take it into your own hand/ And feel it).

Product-quality (perfect, tight-bound wares),as demonstrated by the loops of rope that surround him, has attracted a crowd of onlookers (circle round him).

The youngster senses an irony: the salesman’s lack of constraint and the restraining nature of his product – reins … belly-bands and halters; he notes a waning of audience interest (slippage) evident even to a novice  (knee-high among the farmers).

What the youngster sensed already was that the rope man was his own worst enemy, that his intemperate insinuations (freedoms) would be anathema (menaced) to the conservative Ulster farming community of the period (turn their backs).

Sure enough, once the fair ends, the salesman’s influence is replaced by powerlessness – his audience has dispersed (fair-hill emptied), leaving him with no alternative but to pack up (break the circle) and push off (start loading). 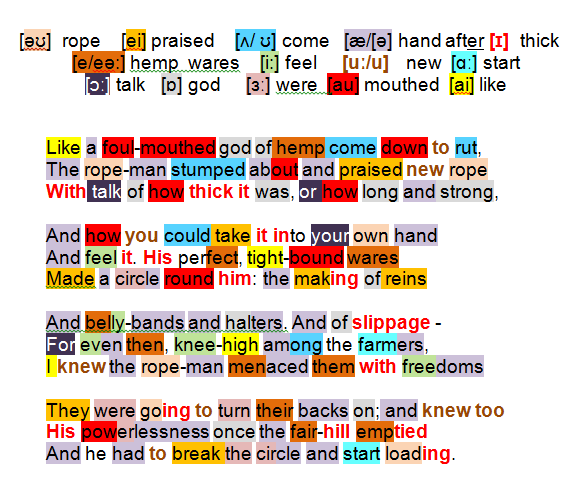