The ‘Settings’ sequence presents a chain of backdrops against which personal events and dramas were played out. Within the dynamic period preceding Seeing Things when Heaney deliberately swooped on anything that stimulated memory or association (DOD 320),  he allowed himself to be transported back by the poems that ‘came on’ to the sites, moments, models and emotions of primary experience, from where he weighed up what ‘in time … was extra, unforeseen and free’ (Markings I).

Settings xix sets out a diorama of memory à la Heaney that features things that might play/ have played a role in its genesis. The reader peeks in as if from behind glass or through a peep-hole.

Heaney paints a stage-set: something built and added to (a building or a city), equipped for maximum visibility, impact, composition and mood. (Well lighted); aesthetically pleasing (well laid out); its characters reminiscent of real circumstances (Tableaux vivants) or resemblances (costumed effigies) colour-coded from privileged kings (purple cloaks … crowns) to victims of tragedy (painted red … smeared with mud or blood).

What is on show mirrors very personal experiences tempered by associated emotions (the mind’s eye could haunt itself), the experiential effect (learn to read/ Its own contents) and the opportunity to re-classify his universe (meaningful order); ars poetica textbooks of old suggested linking things recalled (familiar places) within some kind of hieroglyphic mnemonic (code of images).

Heaney gives a neutral, ‘I-imagined-all-poets-would-do-it-like-this’ shrug: when something with poetic charge (portent) hit him he knew exactly how to respond (blinked and concentrated). 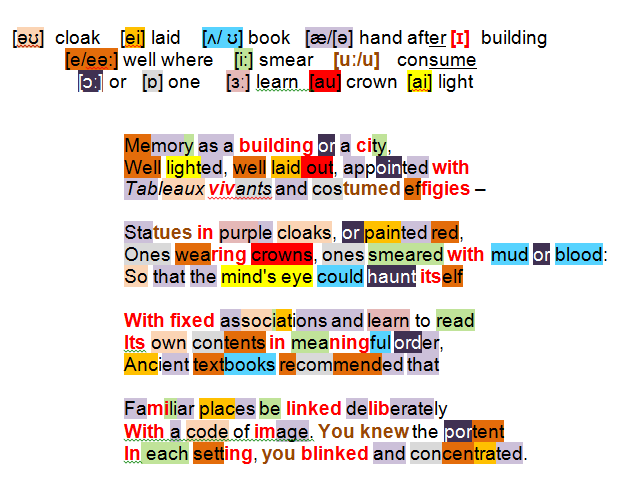