The Markings triptych sets out Heaney’s new parameters: revisit and redefine first order experiences through the eyes of a fifty year old poet, tease out and ‘credit marvels’ he failed to spot first time round.

Helen Vendler puts it another way:  Heaney is concerned here with our immaterial extrapolations from the material … pretended boundaries,  imagined grids and lines are the latitude and longi­tude lines ( ) by which mentality orders the world. They become more visible to the poet as ghostly returner than they were to him as first-time encounterer.

The ‘Markings’ poem … is set in one of our own fields at Mossbawn where a crowd of us would gather up in the summer evening and play until the light died – but what I remember is the way we kept going and even kept seeing the ball after it had got dark.

Rudimentary preparations for a football match: the boundaries (marked the pitch); the area where goals were scored (four jackets for four goalposts); touchlines (the corners and the squares like longitude and latitude) of particular importance when squabbles ensued (things agreed about or disagreed about when the time came) on the rugged, uneven Mossbawn pitch (bumpy thistly ground).

Team selection – each captain picked players in turn, creating opposing teams and defining team loyalties: we picked the teams and crossed the line our called names drew between us.

The kick-off’s loud enthusiasm (youngsters shouting their heads off) slowly dissolved into into an unreal scenario actual kicked ball ( ) like a dream heaviness where growing darkness was no impediment (they kept on playing … playing in their heads), to the sounds of unearthly exertion (hard breathing in the dark and skids on grass like effort in another world).

Allegory generates an analogy for the extra-vision and extra-timeness of poetry, ‘a game that never need / Be played out’, a game played with improvised markings but with unlimited possibilities (Seamus Heaney speaking to DOD (339)

By playing in the dark the youngsters had defied physical and scientific laws (some limit had been passed), earned godlike speed (fleetness), went beyond the ordinary (furtherance), enjoyed endless stamina (untiredness) … and were treated to an extra dimension (time that was extra, unforeseen and free). Therein lay the marvel worth crediting now.

Heaney introduces the figure of his deceased father Patrick Heaney for the first time in the collection.

The improvised touch-lines marked by young footballers contrast strongly with his father’s meticulousness -whether in the vegetable plot (lines pegged out in the garden … straight edge … tight white string), within the tight tolerances of building construction (string stretched perfectly to mark the foundation), wooden corner pegs at exactly 90 degrees set at right angles, made-to-measure (freshly sawn) and trim (spick and span) – or, out on the land, lining things up with his farmer’s eye and guiding horse team and plough unerringly along the imaginary line straight down a field of grazing between the rod stuck in one headrig to the rod stuck in the other.

Events that happened left a mark somewhere in his memory (All these things entered you). There remained a barrier through which he could not see precisely what lay behind  –  door and memory were both part of revelation (As if they were both the door and what came through it).

Heaney suggests he was not in automatic control: on occasion the poetry controlled him and not he the poetry: memories with poetic charge turned up in context (marked the spot) waited there (marked time), held the door open for him to access them!

He provides a trilogy of rural Irish scenes, the first relating to food and agriculture (A mower parted the bronze sea of corn); the second to the life-giving wells of ‘Personal Helicon’ (a windlass hauled the centre out of water); the third to do with working together – Two men with a cross-cut … a felled beech, their shared backwards and forwards motion in step with the rhythms of rural life: they seemed to row the steady earth. 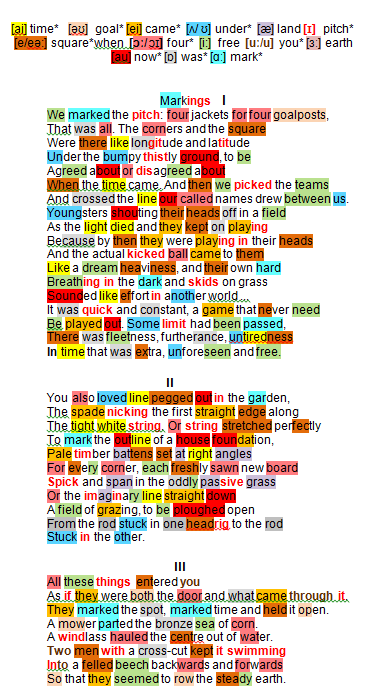