The title of the first section, ‘Lightenings’, arrived by accident, when I found a dictionary entry that gives it to mean ‘a flaring of the spirit at the moment before death’. And there were also the attendant meanings of being unburdened and being illuminated, all of which fitted what was going on as the first poems got written (DOD321).

The message that emerges is that Heaney accepted the ‘attendant meanings’ readily enough but had greater difficulty coming to terms with a definition linking imminent death with a soaring of the spirit; he finds an example that encapsulated his dilemma but does not solve it.

He is weighing the Catholic teachings to which he was exposed against the doubts generated by his personal experience of mortality, most recently the death of his father and his acknowledgement that his own days on earth are numbered.

The first triplet speaks for itself: the introduction leads to the dictionary definition of the word ‘lightening’, identifying it as a kind of miraculous intensity and joy that people feel at leaving this world for a better place (phenomenal instant when the spirit flares/ With pure exhilaration before death) when they cling to the belief that individual repentance will bring redemption and a place in heaven.

Heaney’s exclamation mark suggests that that he no longer shares any such conviction.

His narrative shifts to the bleak landscape of Calvary, where Christ and two thieves were crucified. Heaney thinks he knows of a man who might shed some light on the issue, not Christ Himself whose feelings and words are well rehearsed, but the ‘good thief’ who repented on the cross alongside the Great Redeemer (on Christ’s right hand) at the Crucifixion site (on a promontory). Heaney takes us into the consciousness of the man who heard Christ’s promise and who, literally and metaphorically, is ‘dying to know’.

As he waits to die, death’s inexorable approach transmits nothing positive or transcendental to his anguished mind: his eyes see nothing where heaven ought to be (Scanning empty space); his body feels no respite from unendurable pain (body-racked); he cannot begin to conceive (untranslatable) of the perfect bliss he is suffering pain for (ached) to the very limit of his being (moon-rim of his forehead).

He feels only the painful wounds of crucifixion imprinted like nail craters on the dark side of his brain.

And the fulfillment of Christ’s echoing promise (This day thou shalt be with Me in Paradise)? Until the instant immediately following death (as yet, as yet …) neither the good thief nor Heaney nor we, nor anyone can possibly know … at this point, however,  happy transcendental outcomes do not strike Heaney as too promising. 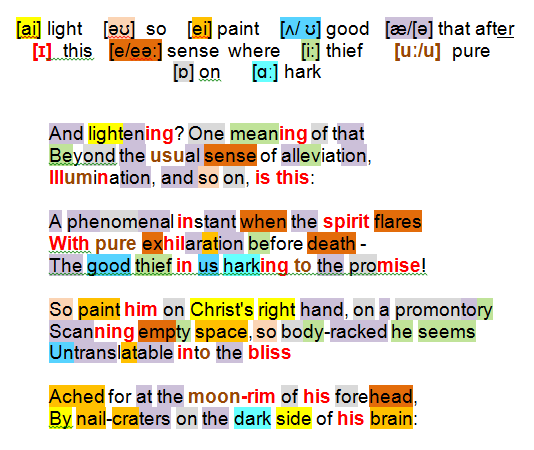