The title of the first section, ‘Lightenings’, arrived by accident, when I found a dictionary entry that gives it to mean ‘a flaring of the spirit at the moment before death’. And there were also the attendant meanings of being unburdened and being illuminated, all of which fitted what was going on as the first poems got written (DOD321)

Heaney offered his reader a clue as to how to ‘enter’ the poems: You could think of every poem in ‘Squarings’ as the peg at the end of a tent-rope reaching up into the airy structure, but still with purchase on something earth­ier and more obscure (DOD 320);

The truth is often stranger than fiction! English-born abstract expressionist painter, Barrie Cooke, settled in Ireland and friend of the Heaney family refurbished a disused handball alley in Thomastown, Co Kilkenny in the mid-1980s for the use of Irish landscape painter, Bernadette Kiely.

The very incongruity of the initiative triggers Heaney’s opening ‘would-you-believe it’ (a glass roof on the handball alley)!

Initially Heaney describes the unpredictabilities of an Irish game played on a rough concrete surface with an erratically bouncing ball (hopped) that might rebound in any direction(merciless angles … in and out of play) or on occasion prove to be an un-returnable drop-shot (levelled true/ For the unanswerable dead-root).

Tongue in cheek but with the warmest of smiles on his lips, Heaney focusses on the ‘builder’: only Barrie Cooke from Heaney’s close circle of friends had the right (read ‘had the artistic nerve’) to conceive of creating an artist’s workshop (studio) from such a disordered space (free maze).

Cooke’s personal traits were  more those of a passionate abstract impressionist than building tradesman: constantly sensitive to minor variations (our walking weathercock), stripping his subject matter down to basics (Our peeled eye at the easel).

To Heaney’s mind he could turn light effects on their heads (outside in)  and perform optical tricks (curb the space), so that something unintended (accident) turned into something he intended all along (tricked to accuracy); where individual elements became somehow more absolute (rain … rainier) for being part of deliberate design (blown /Across the grid and texture of the concrete).

Heaney is all but confessing that while he and Cooke might operate on different creative wave-lengths their approach is not dissimilar!

For Heaney the ‘marvel’ is the extraordinary ‘new lamp for old’, a disused recreational space reborn as a studio … and as for Cooke himself, he is a colossus who scales the world, taking painterly squarings, his perspectives determined at arm’s length … thumbs up!

English-born abstract expressionist painter, Barrie Cooke, settled in Ireland and became a Heaney-family friend. Heaney dedicated ‘Cairn Maker’ in Wintering Out to him and referred to his ‘Godbeam’ poems  in Saw Music  (District and Circle) 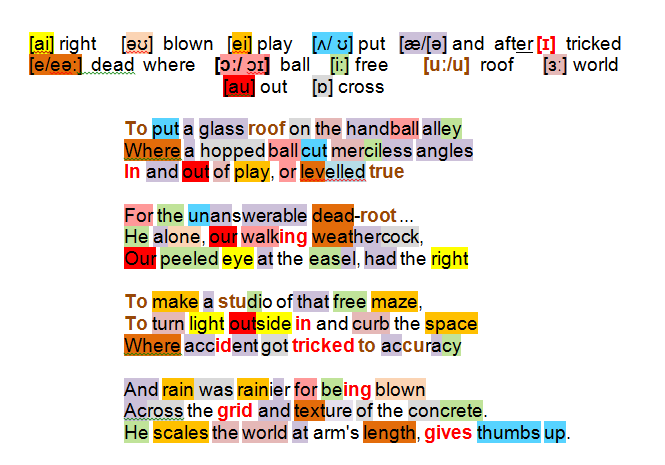