Heaney offered his reader a clue as to how to ‘enter’ the Squarings poems: You could think of every poem in ‘Squarings’ as the peg at the end of a tent-rope reaching up into the airy structure, but still with purchase on something earth­ier and more obscure (DOD 320);

Early Christian and Celtic legend was prone to present mysterious, miraculous illusions to create a sense of awe in humble minds.

Heaney’s version of the legend of Clonmacnoise (The annals say) unfolds in a space between the earth-bound world of a 6th century chapel and an airy, transcendent reality above; the staging provides a kind of ‘skylight’ through which a person may pass from one to the other.

The monks, at their devotions (all at prayers inside the oratory), bear witness to an extraordinary apparition – a ship … above them in the air. Its anchor, dangling through the chapel roof hooked itself into the altar rails, bringing the airy ship to a shuddering halt: the big hull rocked to a standstill.

Incredibly, a figure appeared tasked with freeing the craft (crewman shinned and grappled down the rope but was unable to do so. The abbot understood the submerged sailor’s plight ‘This man can’t bear our life here and will drown’. What followed was straightforward: the monks helped the alien to disentangle the anchor, the freed ship sailed, and the man climbed back from a hostile atmosphere into familiar surroundings.

Heaney credits a ‘marvel’ that works at both levels: the monks can only gawp at an unbelievable event; the extraterrestrial seafarer’s brief experience of life below is an eye-opener to him (the marvellous as he had known it) … Orpheus-like the sailor has entered an underworld before being helped to return to the rarefied air of his own world.

Seeing Things I at Inishbofin turns the superimposed levels on their heads: Heaney, then a child, resembles the crewman of an airy boat, peering down into the ‘seeable-down-into water’ of the depths below.

DOD (321) suggested that the Clonmacnoise poem had become the best known in the sequence. SH replied: The story was unforgettable: it’s there in Kenneth Hurlstone Jackson’s A Celtic Miscellany, but the version I have is a bit differ­ent because I misremembered some of the details. In the original, the boat’s anchor ‘came right down on to the floor of the church’, whereas I have it hooking on to the altar rails – somehow it enters miraculously through the roof and the crewman shins down a rope into the sanctuary. That wasn’t a deliberate alteration;

HV 137 The poem’s two realms represent (according to Heaney in his essay ‘Frontiers of Writing’) ‘two orders of knowledge which we might call the practical and the poetic; … the frontier between them is there for the crossing’ (RP, 303). The poem implies that just as it would be death for the man from heaven to remain in the thicker air of earth, so it would be equally fatal to human beings to attempt to breathe for any length of time the rarefied air of the transcendent. We may ascend to it for a short glimpse of the marvellous, but we must then return to the phenomenal world . The same point is made by Heaney’s epigraph and epilogue to Seeing Things: the first is his translation of The Aeneid’s passage on the golden bough – which allows one to pass into the Underworld and then return – and the second is his translation of Charon’s refusal, in The Infemo, to take the living Dante into his ship of death.

NC 168-9 … in ‘Lightenings’ viii, the old Irish annals recount a … little miracle-tale… emblematic of the way two orders of being – those of imagination and reality, or of religious faith and experience, or of poetry and event – may coexist and inter-depend, and may rely on each other in acts of mutually responsive generosity. The poem is the recommendation of a tolerant beneficence depen­dent on the recognition of, and fascination with, otherness. In one of several interconnections between the first and second parts of the volume, this miracle-tale also shadows the conclusion of the first section of ‘Seeing Things‘, when the poet remembers himself as a child, terrified on the dipping boat, and perceiving his family in a simile which places him in an else­-where like that of the crewman of ‘Lightenings viii’:

Heaney, speaking with DOD (322): I’m sure the image in the first ‘Lightenings’ poem of an unroofed wallstead and an unroofed world must have prompted it. The story has the ‘there-you-are and where-are-you’ of poetry. A boat in the air, its crewman on the ground, the abbot saying he will drown, the monks assisting him, the man climbing back, the boat sailing on. The narrative rises and sets, the magic casement opens for a moment only and the marvellous occurs in a sequence that sounds entirely like a matter of fact. The crewman is a successful  Orpheus, one who goes down and comes back with the prize, which is probably what gives the whole episode its archetypal (imitating an original) appeal; 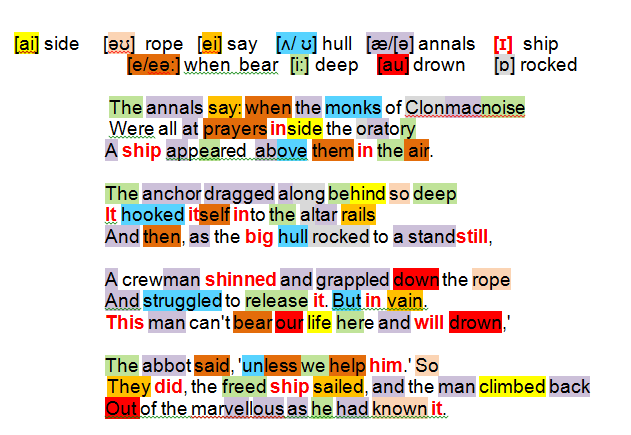