Heaney offers his reader a clue as to how to ‘enter’ the Squarings poems: You could think of every poem in ‘Squarings’ as the peg at the end of a tent-rope reaching up into the airy structure, but still with purchase on something earth­ier and more obscure (DOD 320);

Three triplets revisit a childhood moment when child-Heaney felt totally happy, comfortable and secure; the final triplet reveals the sadness of a poet in his fifties for whom the loss of those who nursed him on that day undermines the old certainties.

The insecurity generated by the scary boat movement at Inishbofin (Seeing Things I) is replaced: the craft in which they stand on  Lough Neagh within a few miles of the Heaney farm at Mossbawn might well be grounded (did not rock or wobble once).

Heaney recounts the outing very precisely: a boat in a reassuring position (in long grass); the traditional day of rest (one Sunday afternoon) when he was about two years old (nineteen forty-one or two); summer (heat); a visual memory of animals present (cattle near the hedge), herd behaviour (Jostling and skittering) that contrast with the calm of the human grouping; a smell memory redolent of 1940s’ ‘Sunday best’, emanating from tweed skirt and tweed sleeve and strong because his nose was buried in the fabric (I nursed on).

Sounds, too: the high pitched musicality of kicks (little treble timber notes … struck from planks) made by the women’s fashionable shoes (their smart heels) … the ‘me’ of yesteryear cradled in an elbow, not yet presented to the public at large (like a secret), since becoming the man he is (Open now as the eye of heaven was then).

What heaven was also keeping an eye on at that moment was his mother and her two sisters (three sisters talking, talking steady on a boat) since taken from him one by one … and he knows that one day he will disappear in his turn: the ground still falls and falls from under. 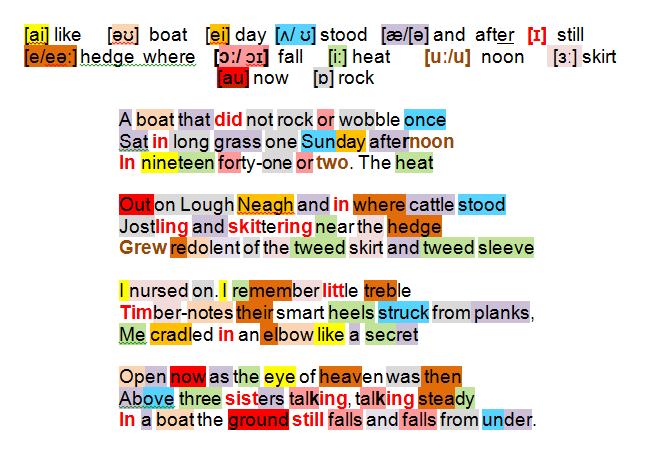