Heaney talked about the therapeutic role Glanmore played in his life : the formal purchase we’d arranged with Ann Saddlemyer restored us to the ‘beloved vale’ in Wicklow. Glanmore Cottage was available from then on as a completely silent place of writing, close to Dublin, no phone, no interruptions whatsoever. In fact, the second poem of the ‘Squarings’ sequence is an immediate act of thanksgiving for the cottage as a ‘bastion of sensation’. ‘Batten down’, it says. ‘Dig in. / Drink out of tin. Know the scullery cold’ -this was before we’d got the central heating.   All that natu­rally sent a powerful surge through the system, as did the writing of ‘Fosterling’, which ended by stating that it was ‘Time to be dazzled and the heart to lighten’. (322)

Heaney offered his reader a clue as to how to ‘enter’ the poems: You could think of every poem in ‘Squarings’ as the peg at the end of a tent-rope reaching up into the airy structure, but still with purchase on something earth­ier and more obscure (DOD 320);

The poem is at once a hymn of thanksgiving and an affirmation. Its earthiness relates to the cottage, the family home, the roof-over-the-head that would witness much of Heaney’s poetic output; a series of imperatives urges the poet to make unhesitating use of his current glut of ideas.

Following the death of both parents, the permanent possession of Glanmore Cottage in 1988 provided a retreat that gave Heaney’s morale a boost (Roof it again).

Glanmore was a ‘bastion of sensation’ to be looked after, maintained, upgraded … and defended (Dig in … Batten down), with few home comforts (Drink out of tin), no central heating (Know the scullery cold), with unsophisticated security (A latch, a door-bar) and a single source of warmth (forged tongs and a grate).

His maintenance chores (to do equally with restoring his personal sense of security and building a sound poetic) involved: testing the roof’s solidity (Touch the cross-beam); shoring up where necessary (drive iron in a wall); checking against subsidence (Hang a line to verify the plumb); verifying the soundness of load-bearing elements (lintel, coping-stone and chimney-breast); ensuring safe, family-friendly access (Relocate the bedrock in the threshold); weighing up the window on the world outside (Take squarings from the recessed gable pane); accepting modest working conditions (your study the unregarded floor).

Once you have sorted this, he tells himself, write poems as sound as the building: build on those those random ideas (Sink every impulse like a bolt); underpin what you perceive (Secure/ The bastion of sensation); trust in your word-hoard (Do not waver Into language); then, when you have made up your mind, go for it: Do not waver in it! 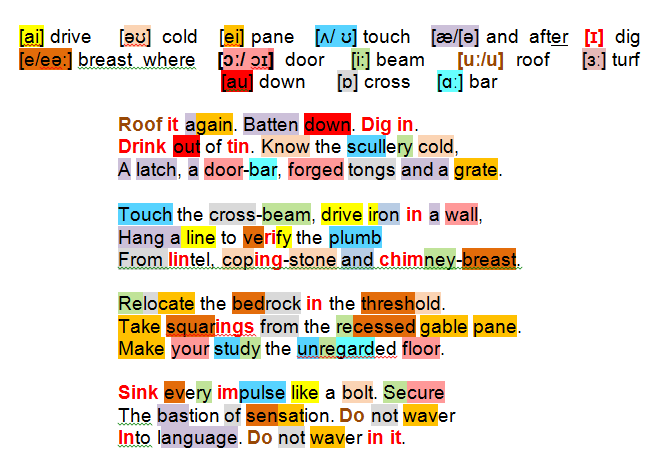