Heaney offered his reader a clue as to how to ‘enter’ the Squarings poems: You could think of every poem in ‘Squarings’ as the peg at the end of a tent-rope reaching up into the airy structure, but still with purchase on something earth­ier and more obscure (DOD 320).

This first Lightening‘s airiness resides in the dazzling sky above, its earthiness in the roofless ‘Irish’ farmstead in which a vagrant figure waits ; its obscurity, more personal and complicated, derives from the poet’s own whirl of feelings involving the loss of both parents (‘the final unroofing of the world’ – DOD322) and his exposure to what Helen Vendler refers to as ‘unignorable annihilation’ (138).

HV offers her own key to this first and pivotal poem: ‘Unroofed’ is … the word which generates the first of the ‘Squarings’, as the poet brilliantly abstracts – in the image of the many derelict roofless cottages found in Ireland – what it is to find oneself alone in the family house after the deaths of one’s parents. Though at first the poem’s shivering beggar-surrogate leads Heaney to summon up the Christian fiction of the ‘particular judgement’ – when one is judged, alone, exposed to the gaze of God, after death – he discards that fiction for the truth: ‘there is no next-time­ round’. What one is faced with in the ruined family house, says Heaney’s final line, is ‘Unroofed scope’ (p140).

The poem’s eye-camera descends sharply from see-through to material before being bounced back into upper air.

The airy structure is dazzling and fluid (Shifting brilliancies). Its chilly winter light reaches into a derelict structure to reveal an abandoned beggar shivering in silhouette, a Heaney surrogate wrestling to keep body and soul intact.

Past teachings have insisted that the ‘beggar-Heaney’ will face God’s judgment after death (So the particular judgement might be set)  – his circumstances are bleak: a man metaphorically unroofed by loss; without a roof over his head (Bare wallstead); all trace of founding-family erased (a cold hearth rained into).

His downcast eye is lifted skywards via the mirror image of reflection (Bright puddle) that reveals unbounded elemental freedom (cloud-life roams) unencumbered by the trammels of metaphysics (soul-free).

Born without choice into life’s commanded journey Heaney asks what may to be expected when, inevitably, it ends.

It does not appear promising: no celestial reception (Nothing magnificent), the humdrum (nothing unknown), mental blankness (A gazing out), a solitary distancing (far away, alone).

Experience has taught him that death is universal (not particular at all). He rejects the old religious projections as fabrication (old truth dawning) … no afterlife, nothing beyond the instant of death (no next-time-round).

What he has a-plenty is all round him: Unroofed scope, a cosmos to ponder … knowledge-freshening wind to blow old stuff away and see things through fresh eyes. 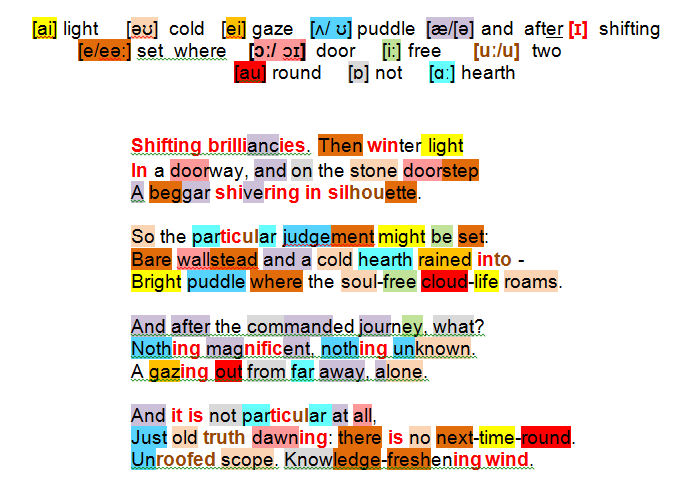