The poet explains his absence from Glanmore as a classical Roman ‘lustrum’ ritual of spiritual cleansing …  Heaney reflects on his return to the cottage.

His desire to be a poet turned him into a ‘word-burglar’, an accumulator of intellectual possessions from early on. He experienced the same intruder mentality (breaking and entering) on taking up the ownership of Glanmore.

The excitement of pilfering the word-hoard for poetic use  (thrilled me) was stronger than any fear it generated (scared me­). The same mix of feelings (still did) accompanied his upward-mobility (came into my own) and his slightly uncharactreristic acquisition of bricks and mortar (my own masquerade as a man of property).

Heaney’s instinctive first impulse was to trust in the honesty of his Irish neighbours: he regarded bolting the cottage (double-bar a door or lock a gate) or concealing what was inside (fitted blinds and curtains drawn over) as a step-too-far (too self-protective and uptight).

Re-entering the cottage after a ‘lustrum’ interval feels like criminal trespass (my own first breaker-in). His mission is to destroy an ancient ‘relic’ (saw up the old bed-frame) for sound practical reasons (the stair was much too narrow for it) … and yet it feels like a sin (bad action) with ominous consequences (so Greek with consequence, so dangerous).

Only proper behaviour (pure words and deeds) will create the memorial Glanmore deserves (secure the house). 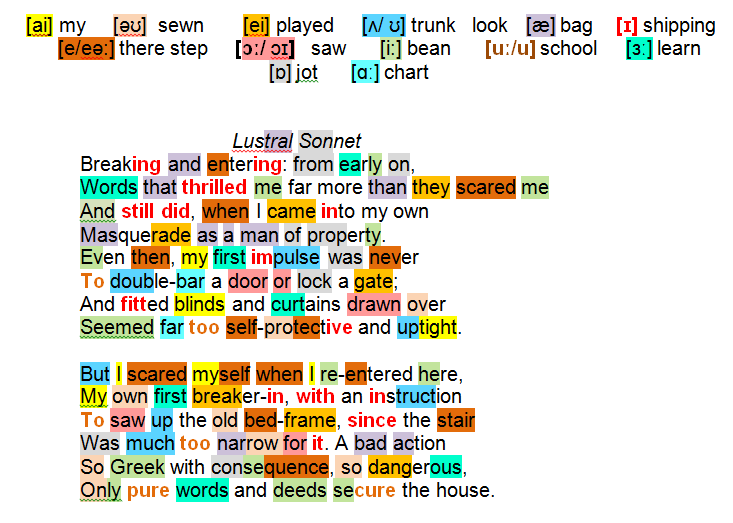