The poem provides a series of visual dramas that occurred along the road outside Heaney’s second family home at the Wood which runs northwards from Bellaghy towards Portglenone via Mullhollandtown. Heaney uses Wood Road in his poems possibly because the actual name on the map (Ballymacombs Road) is too much of a mouthful!

The Wood Road (as it is and was) has been maintained but not upgraded (resurfaced, never widened). This is how it will present when at the end of the poem all its dramas have been played out.

Scene 1: a night scene from the 1950’s period prior to the so-called ‘Troubles’; a caricature  B Special volunteer in training (Bill Pickering … with his gun ) on surveillance duty (nighwatching in uniform) both scene and atmosphere captured in black and white (moonlight on rifle barrels), freedom of movement for the locals severely disrupted (a van roadblocking the road).

Heaney comments sardonically on the puffed up self-importance (special militiaman), the toy-soldier mentality (staunch patrol in profile), the all for one and one for all (sentry-loyal) of volunteers engaged in an ‘epic’ training exercise on a burlesque level – a whole unit of militiamen armed to the teeth and laying siege to a hamlet (harassing Mullhollandstown) of no size whatsoever!

Scene 2: Heaney re-introduces anonymously his great Uncle Hughie Scullion to whom he had first paid tribute In Kinship from the North collection. Hughie was a highly respected link in  the peat-cutting chain whose business involved regular delivery for the domestic hearth and who sometimes took child-Heaney with him (me in broad daylight) on his rounds (on top of a cartload of turf),a smartly turned out rig (built trig and tight).

How proud the youngster felt to be watched by the faces of passers-by (looked up to) from his seat on high (looking down), promoted to ‘grown-up’ (allowed the reins). This was a care-free, temps perdu  (old cart rocked and rollicked).

Scene 3: images (that August day) of a coffin set out in a yard (the hunger striker’s wake) anonymous but that of Thomas McElwee buried in 1981. Heaney captures both the tenseness and solemnity of atmosphere (silent yard … watching crowd …  guarded corpse ) and ritual – paramilitaries in balaclavas (guard of honour), intense, impassive (stared), technically illegal but left undisturbed.

Scene 4 from 1985 – an accident, presented anonymously , that delivered a nasty blow to the Heaney family (stain at the end of the lane) –  7 year old Rachel Heaney daughter of Heaney’s brother Hugh (child on her bike), killed by a road-hog (speed-merchant from nowhere) out of control (hard-rounding the corner) … stark images imprinted on Heaney’s mind … bicycle (back wheel spinning in sunshine) and vehicle (headlamp in smithereens).

Its dramas played out, whether via the brownish tint of old photographs (sepia) or the indelible colour of horror (drip-paint … in blood) the Wood Road remains exactly as described in the first couplet: an abandoned film-set of man-made dramas … just signs of farming left (milk-churn deck) and human activity  taken over by invasive Nature (sign for the bus-stop overgrown).

Heaney speaks sensitively to DOD (pp 259-261) about hunger-strikers and the impact on him of the predicament; he felt sympathy for the men, acknowledging that some people would see their sacrifice as a knock-on effect of a ‘war of liberation’ and others that of a ‘war of genocide’, but he was wary of appearing to promote one cause and not the other; he also introduces Thomas McElwee a local man whose wake he was able to attend with its paramilitary ceremonial but whose family respected his presence as a Catholic above and beyond the politics that were distressing everybody (p 259-61); 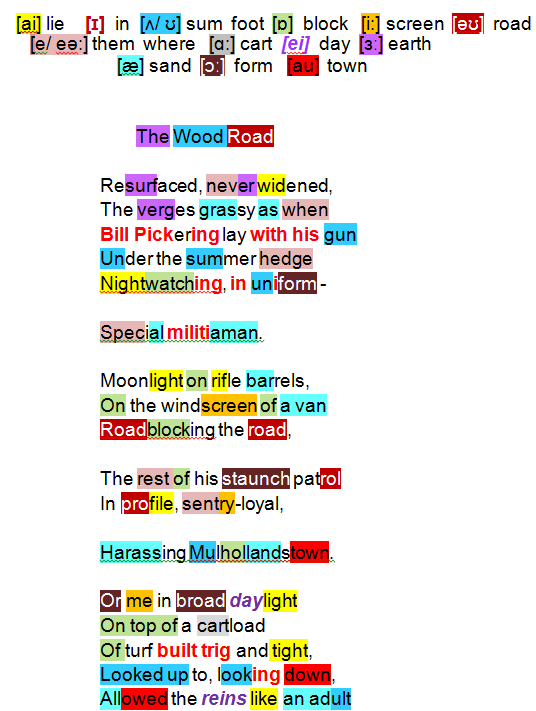