Encouraged by his mother’s example Heaney was a very active member of his local church and served for a period as altar-boy. He later referred to this as a ‘surfeit’ of Catholic training as slowly but inexorably his own faith lapsed. For all his loss of belief the stories and words, parables and liturgy he had learned by heart plus the sounds, smells and church paraphernalia with which he was familiar continued to resonate and emerged whenever poetic charge required.

A Mite Box renews the charity theme downsizing it from large-scale international aid of Human Chain to the poet’s experiences as a youngster carrying a collecting-box round the parish in search of donations.

As Heaney lies awaiting the return of feeling to limbs numbed by stroke (still to feel) he can feel only too well shapes and sensations triggered by memory. The collecting box he recalls was accompanied on his part by a suitably entreating pose (cupped palm) – a hard-wearing object (chunk) it made a jingling sound that spoke of the generosity of others (clink) once filled to capacity (full to its slotted lid) with small change (copper coins) donated by local folk of modest means.

The stated destination of the collection was ‘foreign missions’ and it may be unkind to suggest that Heaney loss of faith is hiding a hint of mischief in an implication that such a vague heading gave the Church carte blanche over the money’s distribution.

The cheaply-made, self-assembly (cardboard kit) of the mite-box gave away its spiritual intention (wedge-roofed like a little oratory). To be trusted with the task of collecting (yours to tote as you made the rounds) brought with it the need for personal responsibility. Children were used, Heaney implies, because they were seen as more appealing (indulged on every doorstep).

The organisers recognized the potential for temptation however and imposed a double check (pinprick in a card).

Heaney comments wryly on the calculating way the collection was sold to volunteers (way for all to see a way to heaven) and falls back on a cunning scientific analogy that allowed simple folk to stare indirectly at the sun (pinholed Camera Obscura) to witness the miracles of the solar system (unblinds the sun eclipsed) without blinding themselves! 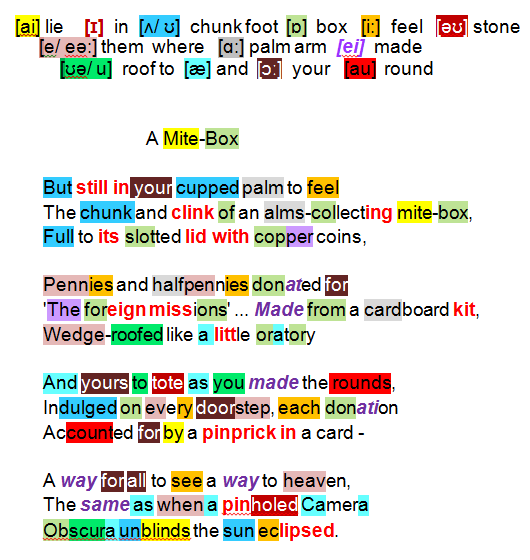