Heaney’s title poem, dedicated to Terence Brown, salutes chains of support – human solidarity in the face of social disaster. He associates himself with the compassion, love and respect required of people who devote themselves selflessly to such missions

The poem adapts the ‘shared burden’ theme of Miracle marking the backbreaking work undertaken by aid workers dedicated to the survival of victims of Third World famine and political repression. He imagines himself as an active even allegorical participant (he is a poet with a public voice and huge sensitivity to the Troubles in his own Northern Irish homeland).

In the final couplet Heaney reflects on his own dwindling potential as a link in the human chain.

Heaney is reviewing footage of basic supplies being delivered in emergency aid (bags of meal passed hand to hand … by the aid workers). Television footage by its nature adds drama to news clips – that of indigenous victims, reduced to animal starvation and fear of not receiving anything, subjected to repressive control (soldiers firing over the mob).

The memory of loading heavy sacks as a farmer’s son is sparked – Heaney (braced again), physically poised to join with aid workers.

Heaney is skilled at describing how the laws of physics and anatomical dynamics inter-react. He breaks down the process (as he illustrated in A Shiver of District and Circle of 2006): firstly securing a grip (two sack corners) by manipulating a handhold (worked to lugs) then dealing with its dead weight (heave)  either in single combat with the sack or operating with a co-worker (eye-to-eye) prior to developing a rhythmical momentum (one-two, one-two) and upswing.

Not just a single sack … more of the same (stoop and drag and drain of the next lift). No greater relief (nothing surpassed) once the weight is shifted from the upper body (quick unburdening, backbreak’s truest payback).

Heaney confesses his youthful sack-tossing days (letting go) are over (will not come again) then reflects on another sense of the phrase – as illness has made it so clear, he is mortal and will one day  relinquish his grip on life – the final letting-go (once) … with no come-back (And for all). 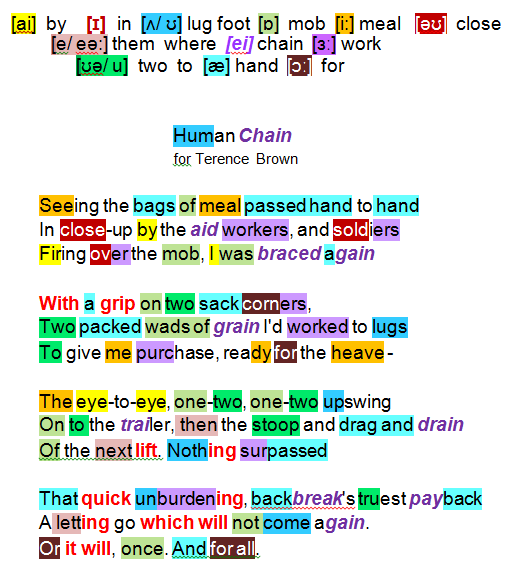