Musicality is clear from the title, both reference to the jingle of a Tudor song and the musical power that words possess or conjure up in the poetic imagination. Heaney picks up the refrain from a joyous Elizabethan madrigal of Shakespearean provenance sung by the choir of Pages in As You Like It.

The refrain placed as a break between verses becomes a predictable repetition echoing a landscape that repeats itself seasonally.

His two poems mimic folk songs: the first celebrating the lush perennial vegetation growing in profusion along the byways of Heaney’s childhood; the second listing an array of images and sensations the poet associates with familiar Irish labels for other hedgerow dwellers.

i The vetch plant familiar to Heaney and his siblings (we) from childhood (robin-run-the-hedge) a washed-out tangle (fading straggle) reminiscent in colour shade of the eponymous Robin Hood, whose Merry Men ranged Sherwood Forest (Lincoln green ).

Familiar territory (Wood Road) both for him and clingy, fragile plant  (sticky entangling berry and thread) heralds the loveliest time of year (summering in) amidst the roadside tangle (tousled verge).

This carol they began that hour,/ With a hey, and a ho, and a hey hey-nonny-no, / How that a life was but a flower/ In springtime, the only pretty ring time,/ When birds do sing, Hey ding a ding, ding./ Sweet lovers love the spring.

ii Four lyrical effects evoked by the sounds and echoes of dialect words. Heaney helps the non-botanist with alternative names and attaches human traits to them.

The first (seggins … sedge) conjures up the gentle sound of air movement (hear the wind) through compliant grass.

Mid Ulster boortree, the common elderberry fuses its dampness to the touch and its generous bounty (dank indulgence ). Next benweed, the ubiquitous ragwort found by roadsides, both independent and striking (singular), less biddable and flexible than the others (unbending). Finally easing is whose flowers droop  meekly in response to the threat of natural precipitation as they sleep (drips of night rain close to the dwelling (from the eaves). 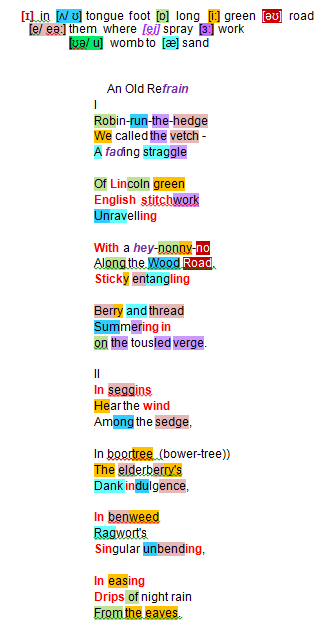