Background: In September 2013 the Derry Journal published a photo taken at Ros Guill  in 1960 (https://www.derryjournal.com/news/remembering-seamus-1- 5534865). It featured ‘Seamus Heaney … pictured with friends on a trip to the Donegal Gaeltacht at Easter 1960’.

Some of them were still traceable 40 years on, at least one of them has died, others were off radar. According to the Journal ‘Those featured include Vera Rafferty, Paddy Simon Gallagher, Peter Gallagher, Margaret Conway, Patricia Bradley, Aoibheann Marren, and Noel Hamilton. Alongside Seamus Heaney in the foreground are Gerry Downey and Patsy Quigg’. It was further suggested that Heaney had used Vera Rafferty’s nickname ‘Chips’ in the poem.

Peter Gallagher, identified in the original photograph, revealed in an article in the Derry Journal that he first met Seamus Heaney 60 years earlier when they sat the entrance exam to St Columb’s College, developing a friendship that carried them through school, Queen’s University and Teacher Training together; he sheds light on the context for the poem: In 1960, I organised a trip to Ros Guill  … We went for a week during the Easter holidays. Seamus came on the trip with his girlfriend at that time, Aoibheann Marren, while I was accompanied by a girl called Margaret Conway. She has been my wife now for 47 years … while there were many others who joined us on the trip, our girlfriends are the only two named in the poem …  a lasting reminder of those memorable few days in Donegal …  on one of the days, the group embarked on a picnic to Dooey, several miles along Cúrsa na Farraige.  … our babble on that rugged road above the sea was multi-lingual – Irish, English, Latin and French. There were stories, sonnets, songs and Seamus playing with words.

The Derry Journal photograph and a sonnet from Dante’s Inferno, canto XX, spark a moving piece with common theme and emotions. Both awaken images of perfect friendship undimmed by the 40 years of inevitable hiatus as those involved went their separate ways in life.

The memories of pleasure and comradeship fill Heaney with nostalgia for a lost domain he would dearly love to re-create … to be back in Rosguill, on the Atlantic Drive … nineteen-sixty.

His poem is addressed to someone male and close (mon vieux) perhaps one of a trio including Peter Gallagher. Mortality has rendered the poet’s dearest wish (mates re-united – you and Barlo and I) unattainable – Barlo has passed away.

Others present at the time (Paddy Joe and Chips Rafferty and Dicky) shared the pretext for being there (talking Irish) plus four others who spring to memory (M. and  M. and Deirdre Morton and Niamh  would be there as well).

The two girls identified by Peter Gallagher – Aoibheann Marren and Margaret Conway were Heaney’s girlfriend at the time and his own future wife – the foursome completes the link to Dante’s sonnet.

If only, Heaney yearns (it would be great too), a still photo could provide a moving picture of what went on then (we could see ourselves) and bring together those separated (the people we are now) by life’s clockwork.

Dante wrote a sonnet in praise of enduring comradeship so why not Heaney in imitation? Heaney, Peter Gallagher (Lapo and Guido), alongside Aoibheann Marren and Margaret Conway, two girlfriends.

There was no boat, of course – these Gaeltacht youngsters were walking the Atlantic Coastal Way, their comradely conversations along that rugged path providing the wildtrack of our gabble above the sea.

Guido, I wish that Lapo, you and I,/ in one enchantment bound, right now could be / inside a vessel faring on the sea, braving the wind, to your content and mine. // Not only would no gale or stormy sky  / impediment or menace ever be, / but living there in constant harmony, / we would forever for more closeness sigh. // And Mona Vanna and Mona Lagia, then, / with the one numbered in the thirty best, / I wish the good enchanter there would place, / where we would ever about love converse, / and each of them would be of bliss possessed, / just as I reckon we would also be.

The intensity of Dante’s friendship with Guido Cavalcanti has a long history. In his great youthful poem of perfect friendship, Guido, i’ vorrei che tu e Lapo ed io, Dante marshals his friends’ names, first among them Guido’s, as talismans of intimacy. Guido, i’ vorrei is a dream of an historical and dechronologized friendship. The sonnet sings of a friendship that stands outside of time and that remains untarnished by history—by that which necessarily catalyzes our divergent egos and divergent interests and is therefore destined to separate us Commento Baroliniano, Columbia University, 2018; 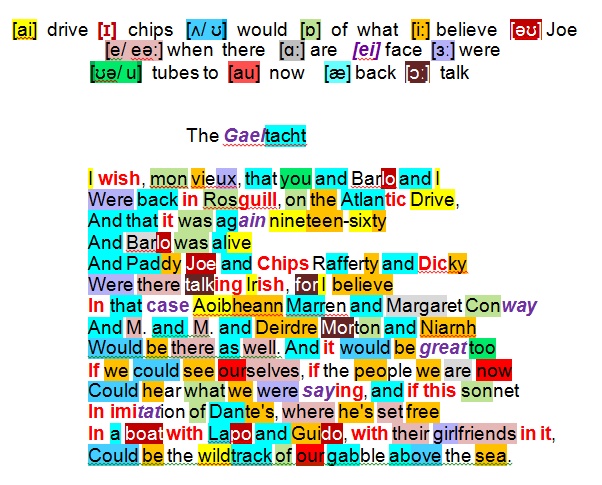