Heaney presents two fragments, the first drawn from his translation of Beowulf and the second from his own post- Belfast chronology; both Beowulf’s swim and Heaney’s move to the Irish Republic were judged reckless. Poet and warrior join forces to rebuff their critics.

An envious courtier, Unferth, has challenged Beowulf’s honour-code by implying that the latter’s exposure to a reckless swimming contest does not make for heroism. In rebuffing Unferth’s comments Beowulf celebrated (sang) his survival after ‘seven days in the icy waves’, swimming and fighting monsters at sea that now lay dead on beaches and would no longer attack passing ships.

For this early Christian the rising sun (‘Light … from the east) is proof of the Almighty (bright guarantee of God), Who brought him safe (the waves went quiet) to shore (headlands) despite evidence of the sea’s destructive power (buffeted cliffs).

Beowulf reminds his critics of the Anglo Saxon wyrd (destiny) – fate looking down and making a decision about his life or death, judging his ordeal to be an act of conspicuous bravery (marked courage) and preserving him (fate spares the man It has not marked already)  for further missions, the first of which will be to destroy the evil Grendel.

Heaney’s decision in 1972 to give up his university lecturing post and to move his family lock, stock and barrel to Glanmore in the Irish Republic triggered a raft of adverse comments from within the Belfast circle that came to his notice (their objection … reported to him) – he must have had a breakdown (gone to bits), he was sacrificing his family’s security (leaving them nothing to hold on to) in the pointless, precarious pursuit of an (unpromising?) career in poetry (his first and last lines neither here nor there).

Heaney joins with Beowulf in rejecting his critics… how could they not see that, as with Beowulf, his risk (the first line and last line of any poem) was the critical gateway on his personal road to success (where the poem begins and ends).

When he loses his rag Heaney is mightily impressive! 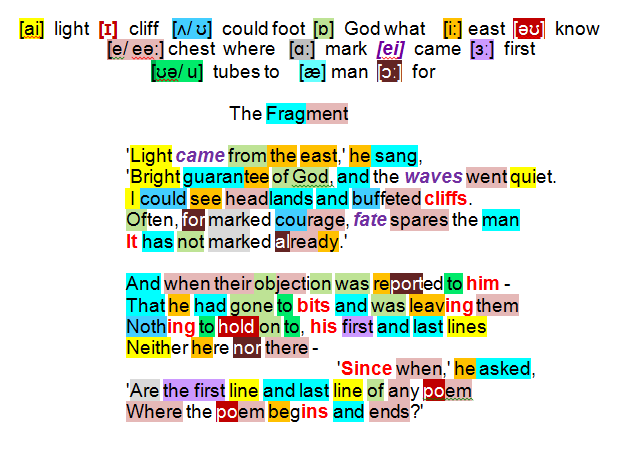