A touching, much admired poem, filled with a warm humanity for individuals and groups; the piece follows Heaney’s aunt Mary’s coffin on its final journey to the graveyard. Mary passed away in the mid 1970s.

Paradoxically spring is showing signs of life at the very moment an old woman has died. Her funeral is well supported by the local community – her cortège filled the road. Heaney makes a link between close-knit rural Ulster communities of the period  and the ritual processions of rural Brittany (remote familiar  women and men in caps walking four abreast.

In the midst of the Troubles the gathering attracts the attention of the forces of order seeking to enforce restrictions -The solemn proceedings are outrageously disrupted by the throttle and articulated whops of a helicopter crossing.

Once the sounds of intrusion have subsided, calm is restored, not just physical awareness … of our own footsteps but a consciousness of political circumstances, being  constrained and smothered –  the value of open air … the life behind those words  ‘open’ and ‘air’.

The deceased is recalled in decline: her world closing in, symptoms of mental and physical extremes (aghast, foetal, shaking, sweating, shrunk, wet haired ) ; oxygen in short supply (beaten breath,) fading features (misting mask,) instances of dementia (flash of one wild glance) not far removed from the pilot’s ghost surveillance from behind a gleam of helicopter glass.

Such is the human cycle: a lifetime, then the deathtime common to all humanity.

A hushed procession of Catholics and Protestants unified by a common purpose (reticence keeping us together when together), where decency dictates that no one airs their differences: all declaration deemed outspokenness.

Portraying her as a self-sacrificing, inhibited spinster Heaney cannot prevent a warm chuckle: in later life she exposed herself to the risk … of certain joys. These were modest enough by any normal standards: her birdtable and jubilating birds, an updated but by no means  trendy taste in clothing – hence the inverted commas – (the ‘fashion’ in her wardrobe and her tallboy) – any suggestion of ‘male’ involvement in her life            limited to the name of a piece of furniture.

Remembered for its chill Spring weather and sadly recalled at intervals (reprise of griefs in Summer’s clearest mornings) or when, perhaps, the death of Heaney’s brother Christopher was remembered (children’s deaths in snowdrops –the soothing flowers of Mid-Term Break) or when the hawthorn trees surrounding Mary’s grave were in blossom (the may) or at moments of full orchestral celebration of nature on a grander scale  (whole requiems at the sight of plants).

Her frail weight, carried lightly on the bier, helps the coffin-bearers (four women … she would have called them girls) to claim the privilege as friends of lifting then lowering her coffin into its final resting place. 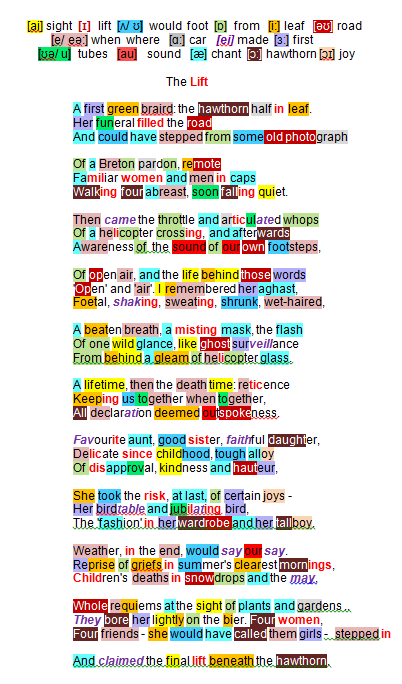