Heaney coins expressions to toast a particular moment on an undated drive west during the pre-Christmas period.  At its simplest, the piece urges celebration of being alive, of ’the time being’, the ‘to-be-going-on-with’.

In a collection that hints at metaphysical issues, bringing us face to face with ‘Mick Joyce in Heaven’, with the otherworldliness of ‘George Seferis in the Underworld’ and Dantesque references to the underworld tunnels of the London Tube, Nonce Words seats us next to an ageing poet at the wheel of his car overriding mortality concerns to savour the privilege of just being there.

Heaney is growing older and he knows it … a senior moment has brought about memory lapse: a missed turning, an alternative route.

A pre-Christmas cold snap that has decorated the world around with frost is introduced with great lyricism: sun on ice, white floss on reed and bushes.

Heaney composes a beautiful device that, without repeating the word, includes ‘cast’ in both halves of the sentence creating a linguistic bridge alongside a real one: a river crossing built of pre-cast-iron (the bridge – iron cast) set, cast in an Advent silence that befits the spirituality of the moment.

The speaker had to stop (sat breathing mist on the windscreen).  His inner thoughts and an on-coming poem set around the Latin ‘May he/she rest in peace’ spoken as a prayer for a dead person (Requiescat) have brought him to a halt. Heaney reveals it did not happen very often: my first stop like this in years.

He alighted from the car well happed up against the freezing weather, his mind taking in the distant beauty: gazing at rimed horizon.

He recognized this as a moment for counting his blessings, for the gifts life has brought, however temporarily (things he celebrates in his work – consciousness, health and contentment, everything to do with existence).

He blessed himself not ‘in the name of the Father’ as of religious Blessing , but deliberately couched in existential terms: in the name of the nonce (‘the current circumstances,, the ‘time being’, the ‘to-be-going-on-with’) and happenstance (what fate has in store).

As for what lies ahead (the Who knows and What nexts) – que sera sera, so be it. 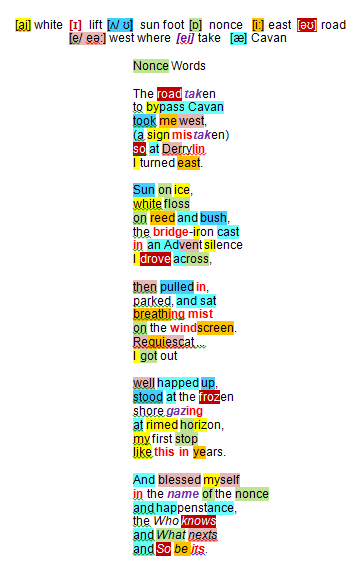