Shared rugs are emblematic of a long partnership that after forty years has lost none of its physical chemistry!

The poem take us to Tate’s Avenue, an address in Belfast via two stanzas devoted to rugs from other occasions and not the particular one he wishes to concentrate on.

The first was a brown and fawn car rug, spread out by the sea but very much earth-bound (breathing land-breaths) and dating from the chaste period (vestal folds) in their early relationship. A  safe, no risk rug (comfort zone) plain but with a touch of decoration (fringe of sepia-coloured wool tails).

The second witnessed a later, more hedonistic moment in Spain under a hot sun, prior to a bull-fight -strewn with picnic remnants scraggy with crusts and eggshells and exotic ‘local’ produce, spread out on the banks of the river Guadalquivir and laced with stimulants (where we got drunk before the corrida)

Finally, the rug: on the face of it an un-dramatic scene unfolding in Belfast, nowhere else to go when civic amenities shut down on locked-park Sunday. On the face of it a totally mundane location, private perhaps (walled back yard), but surrounded by the rammel of domestic life (dust-bins high and silent).

A woman is engrossed in her reading (a page is turned); the man has something else on his mind, his senses heightened when a finger twirls warm hair; she remains oblivious to his inner thoughts so … nothing gives on the rug or the ground.

The man is aroused, feeling lumpy earth (no explanation as to where the lump came from!) and, unfulfilled, keen-sensed to the point of discomfort.

His self-discipline prevails (never shifted) – he knows that his opportunity will come and that it will be mutually fulfilling: when we moved I had your measure and you had mine. They are perfectly suited. 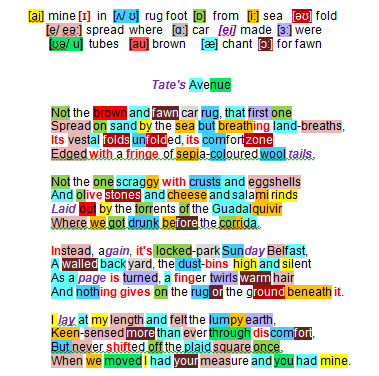