The sonnet celebrates a tree that flourished in the riverbank landscape of Heaney’s upbringing. Alders abounded along the banks of the Moyola. The poet tacks on an appeal for everyone to plant a tree to help the environment.

Heaney takes on the challenge of describing colours and textures in a lyrical version of what might be found in a botanical handbook of trees, citing compelling reasons for planting the alder and raising a glass to each of the qualities in turn.

For its leaves as they inter-react with rain drops: acting as a sound-board (splitter-splatter), disposing of the downfall (guttering ), not taking the relationship seriously (rain-flirt).

For the springtime shape of its first green cones–their stubby lumpiness (snub and clot) and their shades of green (smelted emerald, chlorophyll).

For the dull colour (scut and scat) of cones that cling to the tree long after the leaves have been shed: their texture and sound (so rattle-skinned), their fragility (so fossil-brittle).

For the distinctive colour (flame red) of its mutilated wood when torn.

He loves the alder most of all when it is in blossom for the swinging locks of yellow catkins!

Planting an alder tree is a ‘must’ however scruffy and unkempt it might appear (streel-head in the rain). 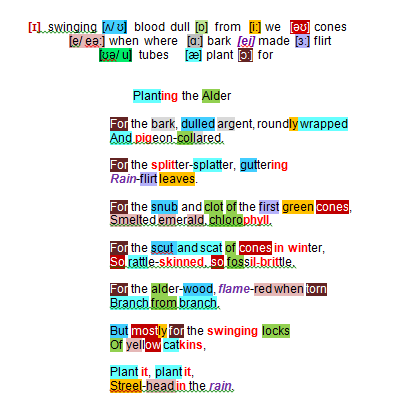