Heaney’s version of a second Rilke poem leaves readers with a double challenge: addressing the complex thinking process of the original poet and considering Heaney’s success as interpreter and translator. For latter comparison an alternative version is appended.

Heaney sees a correspondence with his own inner feelings as if conscious of a certain ‘something’ inside himself that he needs to ‘excavate’. Ultimately he digests Rilke’s message!

Rilke invites us to observe (watch) changes of light brought on by nightfall in an apple orchard (deepening of green in the evening sward).

This has a purpose – he is seeking to give meaning to his feeling (it will be expressed in a long single sentence) that, just as darkness deepens at dusk, and in common with all contemplative spirits (we) he is undergoing the build-up (garnered and stored within ourselves) of an elusive, unspecified awareness (a something).

Rilke claims the emotional state is born out of present and past (feeling and from feeling recollected) is reborn in new hope, buoyed by half-forgotten joys and to be found within an inner recess of the ‘self’ (an inner dark infused with these) where the whirl of emotion takes on coherent shape within his psyche (issues in thoughts).

The orchard turns metaphor: the liberated thoughts are as abundant and haphazard as apples blown down by the wind (ripe as windfalls scattered here); they reflect the intricacy and detail of trees in a Dürer woodcut.

Rilke extends his metaphor –fruiting thoughts are rich and healthy (pendent … gravid) thanks to careful and caring cultivation (pruned, the husbandry of years), emerging in a palatable shape (ready to serve) thanks to time given to maturation (replete with patience).

Every process, growth or thought, has a natural cycle – whatever its outcome/ his intellectual presumption (no matter how above measure or expectation) there comes a moment of reckoning (harvested and yielded).

Two creative minds converge – the sixty-seven year old Heaney who savours his earthly existence but acknowledges that his days are numbered picks up the Rilke message  –  who is blessed with long life is prepared for what is pre-ordained (cleaves to what’s willed) and develops the mute resolve to enjoy his apple-orchard of a life. 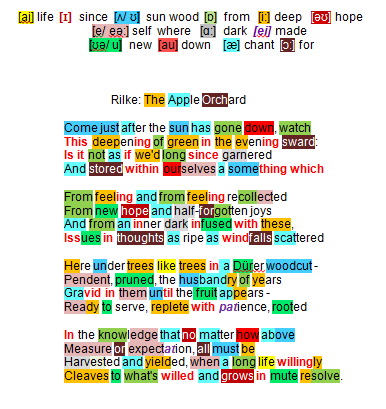