The sonnet-portrait of a humble but fulfilled pig-farmer on the point of packing up after a fulfilling day’s work. A poem as uncomplicated as the figure it portrays.

The farmer takes a last look before he closes down for the night (kills the light) nodding his approval at the cleanliness of hosed-down chamfered concrete, angled at the edges so that the water does not lie. His eye moves methodically via the cleaned up yard and the tools of his particular trade (pails and farrowing crate) to the iconic cast-iron pump, solid as a a classical relict (immobile as a herm), proud as an ancient boundary post (upstanding elsewhere, in another time).

Last looks at the wet shine of the place have come to confirm job-satisfaction.

His feeling of light-headedness can be explained at once by tiredness and his modest (In the end with little) home-bird existence (a home-based man at home).

Despite his oft repeated routine, the same night after nightness, of the tidying process (redding up the work),  the sound of gate closing behind him is still music to his ears heralding the journey home, an uphill trek if only in the physical sense. 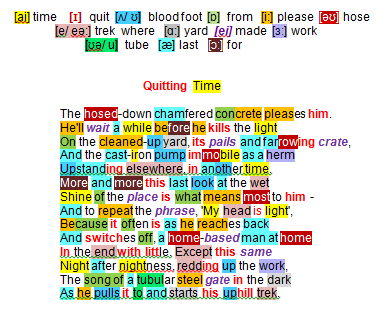