Rilke – deemed Austrian, born in Prague  part of the German-speaking district of erstwhile Czechoslovak Prague , so  of insecure national identity – was at his most prolific between 1900 –1925. His watch-words are: ‘alienation’, ‘lyricism, ‘mysticism’, ‘spirituality’.

Heaney show-cases a version of a Rilke poem from 1908. A man whose past has been destroyed overnight  is suddenly alienated from his environment. The poem is pervaded by uncertainty, unexpectedness and hostile forces that threaten the mental health of an anonymous individual.

Nature begins to take stock of a perceived gap in the landscape, an emptiness behind scorched linden trees  – the phrase introduces both the fire element and the Germanic context using ‘linden’ for ‘lime’. Out of curiosity or to conceal the disaster the trees are still crowding in around a home reduced to a shell, now just one more wallstead.

Despite the remote location, there are children present: a rabble gathered up from god knows where … uncivilised and wild in a pack. Their presence is not explained …  arson, simple curiosity or an element of nightmare.

They are reduced to silence by the arrival of the son of the place, come to search the smouldering ruin for personal effects from under hot, half burnt-away house-beams.

The man is literally and metaphorically unroofed by the catastrophic circumstances like one with a doubtful tale to tell but driven by the need to share his deeply personal feelings with those he finds on the site, present but remote from his lot.

Where to begin? This nightmare is the stuff of fantasy it all seemed  stranger: more fantastical than Pharaoh. Faced with youngsters/ a society in general disinterested in his personal hurt or loss he feels alienation: he was changed: a foreigner among them. 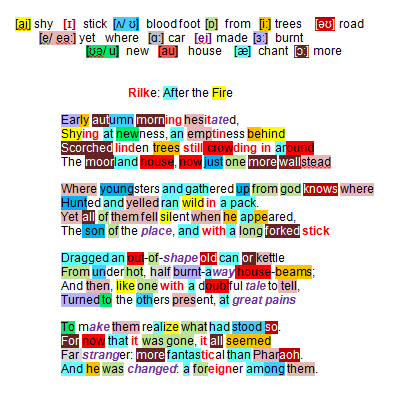 Alternative version by Alan Tucker – The Scene of the Fire

At first light the chequered autumn day hesitates, a change, an unexpected void;/ the leaves of the lime tree hang like rags, walls still smoking, a homestead destroyed./ Kids arrive shouting from God knows where/ Clambering all over, looting, running wild./ But they fall quiet when the son appears,/ equips himself with a long forked stick to wield/ and poking among the still glowing timbers/ fishes out a blackened and bettered kettle/ that, turning to them, he holds high in the air/ as if to prove all existence is brittle/ and to bring to their mind the loss of things,/ and how overnight the everyday, familiar, to hand/ becomes more fantastic than the death of kings./ And he was else. As if from a distant land.