The poetic process in action: an item with poetic charge emerges on the periphery of a television sequence. The title is suggestive of things ‘seen’ by a poet which by-pass ordinary mortals. Cameras following news-pieces is also record the less obvious. What Heaney has spotted sets his creative spirit in motion.

The sonnet links two sets of events involving shock and confusion: the first remembered from Irish history; the second in a contemporary newsreel from the war-stricken Middle-East.

The speaker recalls the specific detail of an incident from the past close to Glanmore that provided poetic charge: the month, the time of day and the weather conditions (bell-clear Sunday). He relives the moment: his stance (elbows lodged strut-firm upon a gate) the pretext for being there: inspecting livestock).

What he sees reflected in the distance (gleams) conjures up a picture of the distant Viking vik of Wicklow Bay (to which his scholarship adds the Old Norse word for ‘bay’ for historical colour).

His first line of thought picks up associations with a turbulent period of Irish history featuring 9th century Viking attacks on monasteries, seats of learning in their time each with its scriptorium, where monk/scribes copied and decorated documents for posterity and without whose work written records would be lost.

He can well imagine the nightmarish fear of the inhabitants (Norse raids, night dreads) and the moments of respite recorded in a written account (that ‘fierce raiders’ poem), in which  welcome storms at sea lessened the threat of attack.

His second line of thought (thinking shock)  brings about the sonnet’s volta after 8 and a half lines –  a jolting return to the present and something on the TV screen he was watching,  wholly unexpectedly (out of the blue) or escaping censorship’s news- blackout.

Heaney focuses not on the central news footage; he is studying the periphery: a shell-shocked donkey, meandering drunkenly away (loosed from its cart) , initially the bearer and subsequently the victim of violence between Middle-Eastern sectarian/tribal factions: (five mortar shells/ In the bazaar district.

It is the donkey that excites poet’s compassion – a stray moving out of shot … lost to its owner and mentally confused (lost for its sunlit hills. Heaney’s choice of prepositions here makes his intended message a touch more elusive. 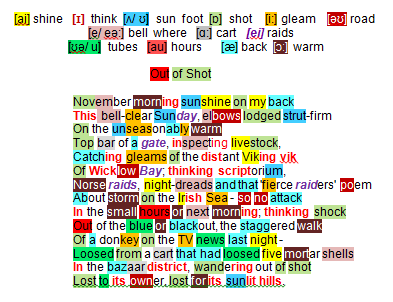